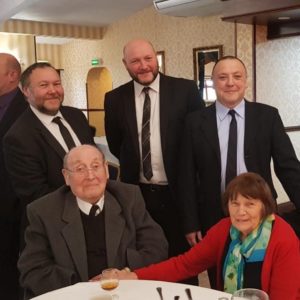 It is with great sadness that the Diocese of Leeds reports the death of Rev Deacon Tom Marshall who died peacefully on Thursday night, 7 November 2019.  Please pray for the repose of Tom’s soul and remember his wife Joyce and his family and friends in your prayers at this time.

Funeral arrangements are as follows:

Tom Marshall was ordained to the Permanent Diaconate by Bishop David Konstant at Leeds Cathedral on 8 December 1994 along with three other men, David Arblaster, Keith Ballard and the late Malcolm King.

Deacon Tom came from Leeds where he was born on 12 April 1934. He was educated at St Joseph’s School in Hunslet and served in the army during his National Service.  In 1959 he married Joyce and they went on to have four children: three sons and a daughter Helen, who predeceased her father. Our picture shows Deacon Tom with Joyce and their three sons.

At the beginning of October this year Tom and Joyce were present at the Cathedral for the Bishop’s Annual Mass for Married Life, as part of their Diamond Wedding celebrations. On the same occasion Bishop Marcus presented Joyce with the Benemerenti Medal in recognition of her long and dedicated service to the Life charity. Tom’s health had been in decline for some time but he and Joyce were able to travel to Lourdes in July of this year with other members of the family to take part in the Diocesan Pilgrimage, as they had done many times in the past.

In his professional life prior to retirement Deacon Tom worked in accounting. In his ministry as a Permanent Deacon he gave faithful service over many years, at times at the Cathedral but especially in East Leeds, initially at St Theresa’s parish and later in the successor parish of St John Henry Newman. He was also a governor at local Catholic schools, including Mount St Mary’s High School. In his final illness Tom was greatly comforted by the devoted care of his family and he died at home in Rothwell on 7 November 2019.

Bishop’s Memento of Dowry Tour Visit to the Diocese