At the beginning of the nineteenth century the Catholic Church in England and Wales was presided over by four Vicars Apostolic, a system of ecclesiastical governance that had originally been established in the seventeenth century. In 1840 the number of Vicariates or Districts was increased to eight and at this point the Yorkshire District came into being. However, given that the number of English Catholics increased ten-fold between 1750 and 1850 the need for further developments in the Church’s pastoral structure was clear. In September 1850, therefore, the Holy See announced the Restoration of the English and Welsh Hierarchy. Pope Pius IX’s apostolic letter Universalis Ecclesiae created thirteen new dioceses. The Yorkshire District became the Diocese of Beverley and Dr John Briggs, formerly Vicar Apostolic of the Yorkshire District, became the first Bishop of Beverley.

After Bishop Briggs’s death in 1861 he was succeeded by Bishop Robert Cornthwaite. Shortly after his consecration Cornthwaite informed the Holy See that in his opinion the Beverley diocese was too large and should be sub-divided in light of the rapid expansion in the Catholic population and the growing number of clergy and parishes in Yorkshire. It was to remain a subject of discussion between the Bishop and Rome for more than fifteen years until, in December 1878, Pope Leo XIII decreed that Beverley should be divided in two: the North and East Ridings to form the new Diocese of Middlesbrough and the Diocese of Leeds to comprise the whole of the West Riding.

In 1878 the Catholic population of the Diocese of Leeds was 98,808 and there were eighty priests serving seventy-four churches or chapels. At the centenary of the Diocese in 1978 the population had increased to more than 266,000 while the number of clergy stood at more than 300 and there were 261 places of worship. For some years past it had been apparent that this growth necessitated a further restructuring of the Church in Yorkshire. Thus in May 1980 fifty parishes in South Yorkshire were ceded to the new Diocese of Hallam, centred on Sheffield. In 1982 the two York parishes south of the River Ouse were ceded to the Diocese of Middlesbrough to unite the City of York under one bishop. In 1988 the parish of Dunsop Bridge was transferred to the Diocese of Salford and in 2004 the parish of Howden was transferred from Middlesbrough to the Leeds diocese.

Today the Diocese of Leeds comprises the whole of West Yorkshire (with the exception of the parish of Todmorden) together with parishes in the East Riding, North Yorkshire, Greater Manchester and Lancashire.

The Patronal Feasts of the Diocese of Leeds are those of Our Lady of Unfailing Help on 27th June and St Wilfrid on 12th October. 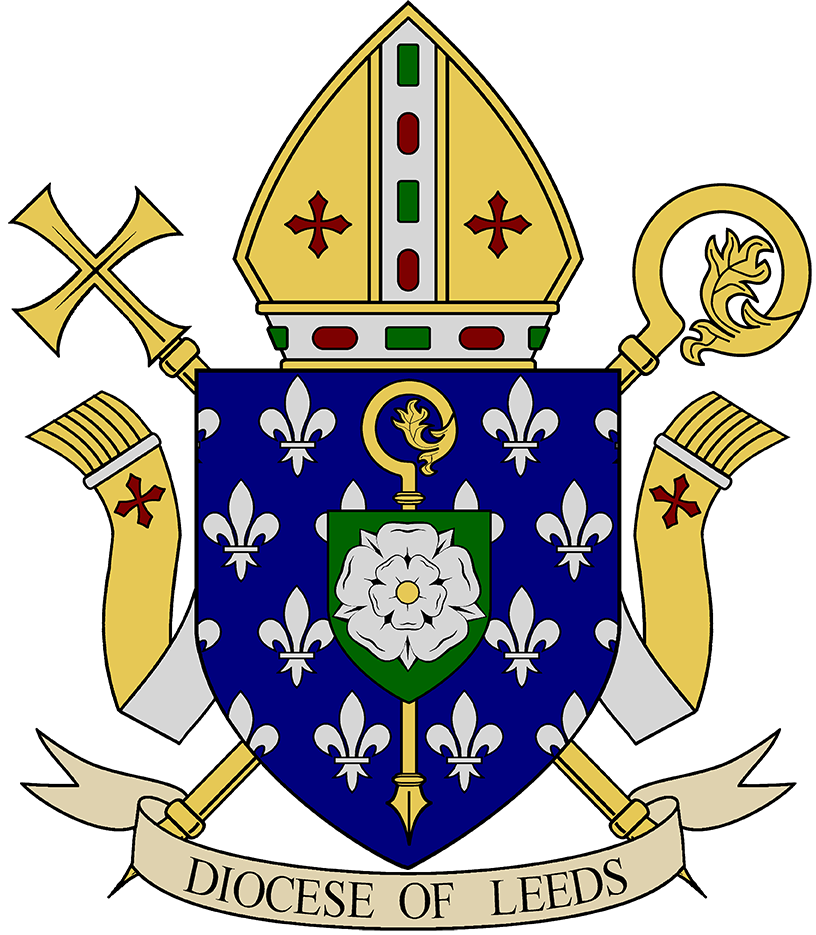 A shield is surmounted by a bishop’s mitre. Behind the shield is positioned a crozier, symbol of the pastoral jurisdiction of a bishop and a processional cross, recalling that the bishop and diocese must look to and always follow the cross of Our Lord Jesus Christ.  The shield incorporates:

Silver fleur-de-lys on a blue background for Our Lady of Perpetual Succour (Our Lady of Unfailing Help), Patroness of the Diocese of Leeds

A gold crozier for St Wilfrid, Patron of the Diocese