The story of Leeds Cathedral begins in 1786 when a Dominican priest, Fr. Albert Underhill, moved the long established Roundhay Mission to premises in the centre of Leeds. In the autumn of that year some rooms were obtained in a building off Briggate to house the mission, and so the town’s first Catholic place of worship since the Reformation came into existence.

This chapel, an upper room adjacent to the Pack Horse Hotel, served the small Catholic community in Leeds for eight years, until a purpose-built chapel, St Mary’s, Lady Lane opened in October 1794.

In 1833 the Dominicans handed over responsibility for the Leeds Mission to the Vicar Apostolic of the Northern District, Bishop Thomas Penswick, who appointed Fr. Henry Walmsley to St Mary’s. At this time the Catholic population of Leeds was growing rapidly as a result of the town’s economic development and the influx of settlers from Ireland.

Thus, in 1831 St Patrick’s chapel opened on York Road, and in 1836 Fr Walmsley obtained a site for a new church in the town centre to replace St Mary’s. This church, designed by a local architect, John Child, opened in October 1838. It was dedicated to St Anne in honour of Anne Humble, the late sister of Grace and Sarah Humble the principal benefactors of the new church, which stood at the junction of Guildford Street (the present-day Headrow) and Cookridge Street.

St Anne’s was raised to Cathedral status in 1878 with the creation of the Diocese of Leeds. Twenty years later it was clear that the days of this great church were numbered owing to Leeds Corporation’s plans for this part of town. At the end of 1899 it was formally announced that the Cathedral was to be compulsorily purchased and demolished. Several alternative sites for its replacement were considered but it was decided to accept the Corporation’s offer of land just a few yards away from the existing church, at the junction of Cookridge Street and Great George Street.

Construction of the present Cathedral began in the autumn of 1901 and the foundation stone was laid in July 1902. The task of designing Leeds’ new Cathedral was given to a London architect, John Henry Eastwood (1843-1913), who had been born near Leeds. He in turn engaged the services of a talented assistant, Sydney Kyffin Greenslade (1866-1955). Together they produced an outstanding design in the Arts and Crafts neo-Gothic style with an unusual layout to accommodate the Cathedral’s relatively small city centre site.

The official opening of the Cathedral, led by the second Bishop of Leeds, Bishop William Gordon, took place on 16 June 1904. The new Cathedral was perhaps the most important undertaking of Bishop Gordon’s episcopate and its development was something in which he took great personal interest.

The Cathedral was consecrated in 1924 and the interior has been re-ordered on two occasions: first by Bishop Dwyer in 1963 (during the Second Vatican Council) and most recently in 2006 by Bishop Roche. 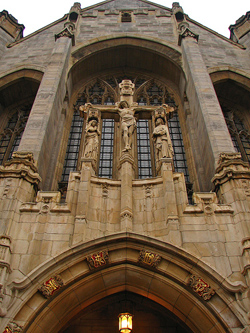 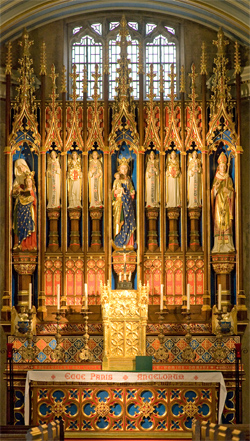