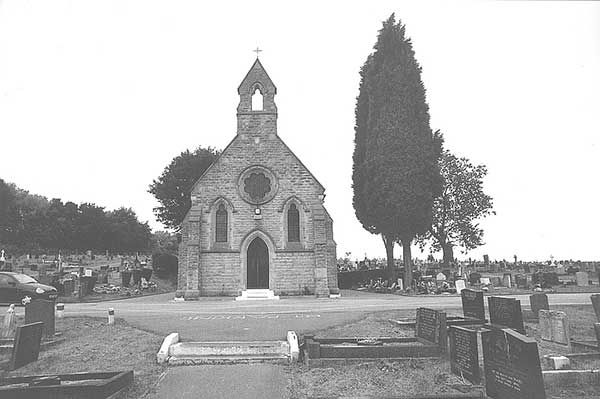 The Leeds Catholic Cemetery, or Killingbeck Cemetery as it is more commonly known, opened in 1895 as a replacement for the small burial ground attached to the old St Patrick’s chapel on York Road. The need for a new and much larger Catholic cemetery to serve all the Leeds parishes had long been apparent, given the growth of the city’s Catholic population during the 19th century. The first burials at the new cemetery took place in March 1895 and the Bishop of Leeds, the Rt Rev William Gordon, performed the official opening in July of that year.

Since 1895, almost 50,000 burials have taken place at Killingbeck Cemetery and there can be few Catholic families in Leeds that do not have some connection with the cemetery and its history. When Bishop Gordon died 7th June 1911 he was buried at Killingbeck. As with his successor Bishop Cowgill, who died 12th May 1936 and numerous priests of the diocese both before and since, he was laid to rest in sight of the Cemetery Chapel, which was built in 1902-03. At various times during the past 100 years the chapel acted as a place of worship for the growing Catholic community in East Leeds, particularly before the building of new churches at Cross Gates and Seacroft.

In 1995 Bishop Konstant celebrated Mass in the chapel to mark the centenary of the opening of the cemetery.  By 1995, the cemetery’s future appeared rather uncertain. It was by then almost full and it was no longer possible to reserve a burial plot, as what little space remained had to be available for immediate needs. Closure, therefore, seemed likely until the adjacent site of the former Killingbeck Hospital was earmarked for redevelopment. In approving planning consent for the new development, the Local Authority insisted that some of the land at the former hospital was gifted to the Diocese for an extension of the Cemetery. The transfer of land took place in 2005 and opened in September 2009.  This has created the space for over 1,000 new graves and new plots for cremated remains.