The family was setting off on an adventure.  There would be new things to see, unknown places to visit.  At the moment they were secured in their seats, awaiting take-off.  The plane taxis to the end of the runway and the roar of the  engines builds up;  the whole plane seems to shake with the noise.  The brakes are released  and they hurtle down the runway until they lift off and find themselves airborne.

I wonder if the Apostles and their friends felt something similar as they waited in that upper room in Jerusalem?  Was there a sense of rather nervous anticipation?  Jesus had told them to go to the whole world to spread the good news that He had risen.   How would they face up to such a  task?

The answer came in the roar of a gale and with fiery flames of speech.  Peter spoke with the power of God behind him and that day three thousand people were added to the Christian family.

We do right to remember all this on the Feast of Pentecost.  It was the day when ordinary people were filled with extraordinary gifts. No longer would they be a timorous group who had lost their master and who were fearful about what their enemies might do.

Now they spoke of their new faith with total confidence.  We, their brethren, the present family of the Church, can still proclaim  that same faith with similar assurance.

We can still pray, ‘Come Holy Spirit, fill the hearts of thy faithful and kindle in them the fire of thy love’. We may not hear the rush of the gale nor see the flickering flames of fire.  Now, the power of God comes to us silently but surely, and still makes us his witnesses ‘to the ends of the earth’. 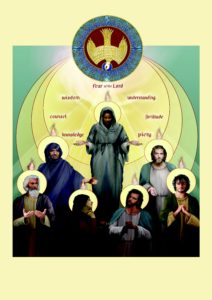 MacMillan’s a ‘Must’ for Music Lovers!