It is with sadness that the Diocese of Leeds announces the death of Mgr John Dunne on Saturday 25 January, at Mount St Joseph’s in Headingley.

The Funeral Mass for Mgr Dunne will take place on Wednesday, 12th February at 11am in the Chapel at the Little Sisters, followed by interment at 1.30pm at Bowling Cemetery, Bradford BD5 8LQ.

Eternal rest grant unto him, O Lord and let perpetual light shine upon him. May he rest in peace. Amen. 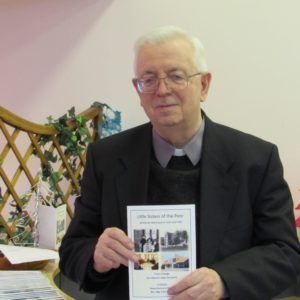 A priest of the Diocese of Leeds for nearly sixty-five years, like so many others of his generation Mgr John Dunne came from Bradford and was educated in the city at St Bede’s Grammar School.  He was born on 15 April 1932 and on his father’s side he was descended from the Dunne family of Courtnacuddy, a village near Enniscorthy in County Wexford. He began his training for the priesthood under Bishop Poskitt in the late 1940s and studied at Ushaw College in County Durham. He was ordained at St Joseph’s Church, Bradford on 23 July 1955, just three months after his twenty-third birthday.

From 1955 to 1966 Fr Dunne served as Assistant Priest in several parishes in the Diocese. He went to St Brigid’s, Huddersfield shortly after ordination and remained there until 1958 when he moved to St Joseph’s, Hunslet. In 1961 he was appointed to St Edward’s, Clifford and in 1965 he moved to the Holy Name parish in Leeds. This last appointment was relatively short-lived for in the following year Bishop Wheeler asked him to become Bishop’s Secretary. Thereafter he helped Bishop Wheeler, who came to Leeds in the summer of 1966, to settle into his new diocese and into his newly acquired home, Bishop’s House at Eltofts, near Thorner. He served as Bishop’s Secretary for the next five years.

Fr Dunne became a Parish Priest for the first time in 1971 when he was appointed to St Anne’s at Thornhill, Dewsbury. In 1978 he was appointed a Chaplain of Honour to the Holy Father, with the title of Monsignor. In the same year he moved to the parish of Ss Peter and Paul at Yeadon and in 1986 he went to St Joseph’s, Harrogate. His final appointment came in 1997 when Bishop Konstant asked him to become Parish Priest of St Joseph’s, Bishop Thornton. For a man with both a deep love and knowledge of Catholic history this village was a special place for Mgr Dunne, where the Mission dated back to Penal Times and the church was built in 1809, twenty years before Catholic Emancipation. He remained at Bishop Thornton until his retirement from active ministry in 2003.

In retirement Mgr Dunne lived at Hinsley Court in Headingley. Until the onset of his final illness shortly before Christmas 2019 he spent much of his time researching and writing about Catholic history. In 2009 he wrote ‘A Constant People’, a history of the parish at Bishop Thornton on the occasion of the bicentenary of St Joseph’s Church, and in 2015 he produced a history of the Little Sisters of the Poor in Leeds, to mark 150 years since their arrival in the city. It was fitting that the Sisters cared for Mgr Dunne at Mount St Joseph’s Home during the final weeks of his life.

In 2004 Mgr Dunne wrote a short contribution to ‘A Hunslet Story’, the history of the parish of St Joseph in South Leeds. In this he reflected on his arrival there in 1958: “I was then twenty-six and had been ordained barely three years. Now I am in my seventies, retired from parish life, arthritic in knees but lively in mind and still remember with affection the parishioners I knew in Hunslet so very long ago…who had little in worldly goods but were endowed with what was far more valuable, a warmth of heart”.

As Mgr Dunne remembered the people of Hunslet, so we remember him: with great affection, as a devoted priest, as a gifted writer and scholar, as a witty companion and as a gentle man.

Pope Francis Calls for Remembrance and Prayer on Auschwitz Anniversary

Learning about the Liturgy