The New Year did not get off to a good start for Fr Jim Leavy, the former Parish Priest of St Aelred’s, Harrogate. Fr Jim still lives in the town and on Friday 7 January he went to visit an ex-parishioner and at the same time decided to do some shopping at a nearby supermarket. Before going in he parked his electric-powered mobility cycle outside the shop. Within a few minutes thieves stole the bike and left Fr Jim stranded. News of the theft and of Fr Jim’s need for a new bike spread quickly and locals set up an on-line crowdfunding page to raise money to buy a replacement. The target was £1,000 but within a week more than 130 donors had given a total of more than £2,200 and anyone visiting the website soon became aware of the respect and affection in which Fr Jim is held not just by local Catholics but by Harrogate residents in general, not least because of his continuing ministry as chaplain to Harrogate Hospital. 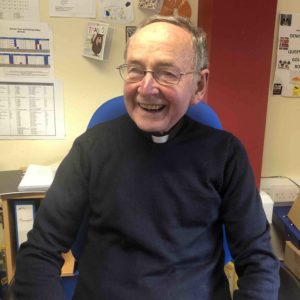 Among the donations was £70 from the proceeds of a cake sale organised by the girls’ football team at St John Fisher High School in Harrogate.

Fr Jim spoke of his shock and anger when he realised that his bike had been stolen but that he had been amazed at the fundraising effort and the comments that accompanied many of the donations, often from people he didn’t know personally. These were summed up by one donor who simply said ‘A great man deserves a good bike!’

Fr Jim said that he ‘would like to say a big thanks to everybody who contributed in anyway. I’ve just been overwhelmed by the generosity of so many people and I wish I could say an individual “thank you” to everyone but obviously I can’t’

So, the story has a happy ending, Fr Jim is back on the road and it’s a story that is also a wonderful tribute to his ministry in Harrogate since he first went to St Aelred’s in 2004.