Ordination followed by a Baptism of Fire!

Fr Henry Longbottom was ordained to the Sacred Priesthood on Friday 17 July in a Votive Mass for the Feast Day on which the Ordination would have taken place had lock-down not intervened: the Feast of St Margaret Clitherow and the Yorkshire Martyrs.

Physical distancing regulations meant that Henry’s family, including his four sisters, his friends, parishioners, and fellow clergy were spaced across the Cathedral – but this did not affect the sense of joyful occasion, and although there is now no congregational singing, the music from the Cantor and Organist created a prayerful atmosphere.

Bishop Marcus reflected in his Homily that Fr Henry would hopefully never have to encounter actual martyrdom; however, it is the lot of a priest – and indeed of any Christian witness to the Faith – to make sacrifices and to endure hardships and calumnies. Before Fr Henry was vested in his new chasuble, Bishop Marcus explained the significance of this vestment to a priest, which is to remind him of charity, the love of  Christ: ‘Over all these virtues put on love, which binds the rest together and makes them perfect’ (Colossians 3:14)

Fr Henry’s Ordination chasuble had been chosen for the original date of his first Mass at Pentecost. The gold-embroidered tongues of flame on the red silk background turned out to be symbolic of another ‘Baptism of Fire’, as just 48 hours later, our newest priest was broadcasting on BBC Radio 4’s flagship religious programme, Sunday Worship. The BBC producers had asked Fr Henry for a very personal account of his path to priesthood in the context of the Scriptures and hymns that had inspired and comforted him as he contemplated making that sacrifice – and as Co-ordinator for the Leeds Diocese’s ‘Year of the Word’, he was able to promote the importance of having a strong foundation of faith in the Holy Scriptures, fortified by the Real Presence of Christ in the Holy Eucharist. 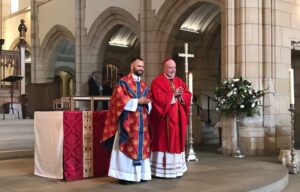 A Sapphire Anniversary for Archbishop Arthur