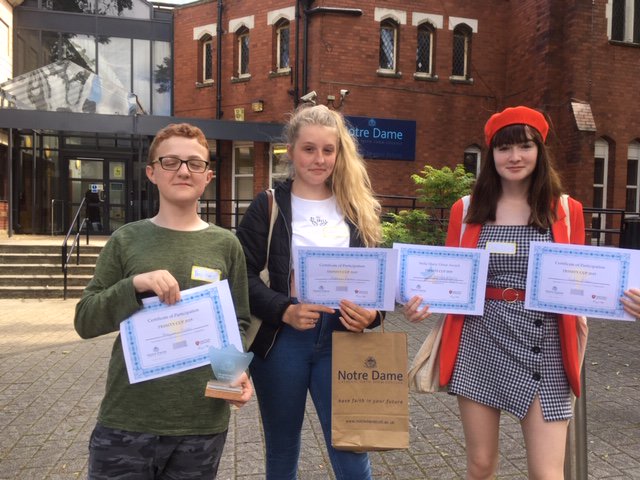 Congratulations to Madison Farrar, Ben Fisher and Sophie O’Leary from St John Fisher School in Dewsbury, who represented the school with aplomb in the Trinity Cup – taking home two special prizes between them.

The Trinity Cup is an ambitious youth debating competition which takes place annually at Notre Dame Sixth Form College between students from different secondary schools from across the Diocese of Leeds. Discussions ranged from Philosophy and Ethics to Theology and the Principal – Justine Barlow – paid tribute to the spirited and confident arguments put forward by all.

Sophie, who was awarded the Stella Maris prize for exemplifying the virtues of respect, kindness and perseverance said that she was initially ‘nervous about the day’ but the ‘calm atmosphere and welcoming environment’ had helped her to settle in.

Ben was awarded the prize for Outstanding Contribution. His favourite aspect of the day was ‘embracing the opportunity to debate using his original thoughts and ideas’.

Madison thought that her contributions were valued by everyone and she was ‘able to express her views without fear of judgement’.

A Yorkshire Catholic Gentleman of the Eighteenth Century