Lay faithful and clergy across our Diocesan Family are already putting into practice some of the fruits of the Parish to Mission Listening Sessions which have been taking place as part of the recent Synodal Process.

One of the suggestions made at the St Joseph’s Parish meeting in Castleford was to celebrate the gifts of women in the Church by re-establishing the Union of Catholic Mothers (UCM) in the parish. A Votive Mass in honour of Our Lady with prayers for the intentions of the UCM was celebrated by the Parish Priest, Fr John Aveyard and took place during the month of May which is dedicated to Our Blessed Mother.

One of the event’s organisers is the parish’s new UCM Secretary, Carol Sidebottom, who said:

‘During the pandemic when permission was first granted to re-open places of worship, St Joseph’s re-introduced Thursday evening Mass, and it was here where parishioners first mooted how good it would be if we had a UCM within our parish. But nothing came of it until Bishop Marcus’s Pastoral Letter, inviting all of us to help shape the future of our churches and parishes by taking part in the ‘Parish to Mission’ Synod. The Inaugural Mass to re-establish a UCM Foundation in the parish of St Joseph’s Castleford was a direct result of the listening process, but it would not have been possible without the support and guidance of our Parish Priest, UCM Chaplain Canon Laurie Hulme, and UCM Diocesan Officers Margaret Chambers, Susan Oldroyd and Catherine Simpson.’

Among the (fourteen in total) new UCM members at the Castleford parish is President-Elect Kathryn Waugh who is Carol’s daughter as well as mother of one of the members of the Bishop’s Young Catholics’ leadership group, ‘The Twelve’ – making three generations of Catholic women actively supporting their parish and diocese! The membership includes Readers, Eucharistic Ministers, Organist, Stewards, Missio Representative, 200 Club Organiser and School Governors – all leading the way in faith and commitment to their parish and diocesan communities.

The Inaugural Mass was served by Anne Riley with hymns accompanied by organist Claire Johnson and was attended by specially-invited guests including Dr Richard Sloan MBE whose late wife Cath was a great supporter of both St Edmund’s Airedale and St Joseph’s Castleford UCM and a volunteer representative with CAFOD in Leeds. Yvonne Crewe, a former President of UCM St Edmund’s Airedale in the 1980’s and Patricia Bird, a long-serving member of a previous St Joseph’s UCM have a treasury of stories to share with the new members about the wonderful women who served UCM in former years: at St Joseph’s as well as in the parishes of St Edmund’s Airedale and St John’s Allerton Bywater which are now part of Castleford’s parish.

Over the years, those Catholic Mothers had organised pilgrimages to Lourdes, Oberammergau, Santiago de Compostela, Fatima, Rome, and Knock. More locally they attended rallies at Walsingham, day retreats at Hazelwood Castle and Ilkley – all usually accompanied by their Parish Priests. The highlight of years gone by was the first Tuesday in July, when the mothers would set off early with folding chairs and packed lunches to Walsingham, where Mass would be celebrated close by the Slipper Chapel in the open air.

Carol Sidebottom said, ‘It is both pleasing and heartening that the membership of the re-established UCM is made up of parishioners from all the former parishes of and the link in the chain continues to carry-on the work of our own mothers in working to support the UCM, the Parish Priest and the wider Parish community through prayer and charitable works.’

In his Homily, Fr John Aveyard spoke of Mary the Mother of Our Lord Jesus Christ and the importance of her position as a woman and a mother within the life of the Church and as a source of help and comfort to all of us. He fondly remembered the mothers at St Mary’s UCM in his native Batley, who upon his ordination in 1981 presented him with purple vestments which he wore to celebrate his first Mass as a priest.

St Joseph’s Castleford’s ‘re-founded and refreshed’ Union of Catholic Mothers now meets monthly in the Church Hall after Thursday evening Mass. Two of the first aims for the new members are to organise a Parish Pilgrimage to Walsingham with the Diocese of Leeds and to fund-raise for CAFOD, the UCM’s nominated charity for 2022.

‘In today’s fragmented world, where we risk losing our bearings, a Mother’s embrace is essential.’
(Pope Francis, Reflection on Mothers, 1 January 2019) 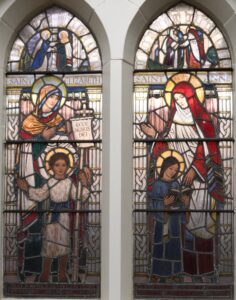 The Holy Women of St Joseph’s Castleford: windows dedicated to Our Lord’s Aunt and Grandmother 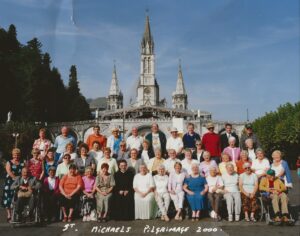 A joint parishes’ UCM Pilgrimage to Lourdes in the year 2000 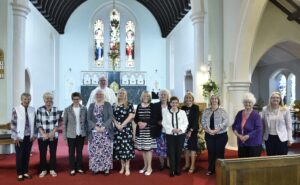 A Royal Patronage Benefits our Churches