Our Lady of Unfailing Help 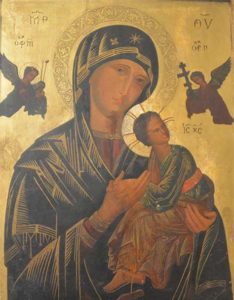 Leeds Cathedral’s C19th image of Our Lady of Unfailing Help

An ‘icon’ is a Christian picture that tells a story or teaches a truth. Traditionally, icons have been associated with the Eastern Church, but have played a part in the Western Church also. The icon of Our Lady of Unfailing Help is an icon that tells of the Passion and Death of Jesus, and of the suffering of Mary His Mother.

The original picture of Our Lady of Unfailing Help was painted on the island of Crete over five-hundred years ago. The picture was stolen by a merchant in 1498 and brought by him from Crete to Rome the following year. It is recorded in the history of the picture that the merchant fell seriously ill and fearing death he asked a friend to place the picture in a church where it could be once again seen by the faithful. The merchant died, but his friend held on to the picture and it was placed by his wife in their house. After a series of visions of Our Lady, the friend was finally convinced to part with the picture and place it in accordance with Our Lady’s request in the Church of St Matthew in Rome. The Church of St Matthew was destroyed in 1798, but the picture was kept safe by the Augustinian friars. Only when a new church was built on the site of the old St Matthew’s could Our Lady’s request be fulfilled once again. The new church was the Redemptorist church of St Alphonsus, the obvious place for the picture, so near its former home. And so, the Pope requested that the picture should be moved to the Redemptorist church.

On April 26 1866, the picture of Our Lady of Unfailing Help was solemnly installed in this new church of St Alphonsus in Rome. The first copy of the picture to leave Rome came to Bishop Eton, the Redemptorist church in Liverpool. Since then, copies of the picture have been taken to the four corners of the world.

In June 1867, Pope Pius IX approved the coronation of the icon by Vatican chapter, and thus thousands of copies made from the original since this date show Our Lady wearing a crown. However, the icon incorporated in the Shrine in the Cathedral Church of St Anne is uncrowned, and must, therefore, have been painted prior to 1867. Our Lady of Unfailing Help was declared the principal patron of the newly-created Diocese of Leeds in 1878.