Following the award of a grant of £3m from the Government’s Culture Recovery Fund, the Catholic Bishops’ Conference has announced that funding has been offered to 29 Grade I and Grade II* listed churches and cathedrals throughout England. All the grant applications submitted,were presented to an Expert Panel comprising a range of national heritage specialists, and also reviewed by Historic England. The good news is that the three churches in the Diocese of Leeds which submitted applications have been successful – Leeds Cathedral, St Joseph’s, Pontefract and St Wilfrid’s, Ripon. In total they have been awarded grants worth £166,000. Only seven churches in the whole of the North East and Yorkshire were awarded a grant. At the Cathedral the funds will allow for the fire alarm system to be replaced and urgent stonework repairs to be carried out; at St Joseph’s the works involve urgent repairs to the roofing and at St Wilfrid’s there will be repairs to the church’s high level windows.

This grants programme is part of the government’s Heritage Stimulus Fund, administered by Historic England and is aimed at supporting major repair projects which either stalled earlier this year because of COVID-19, or where loss of income due to many months of closure put urgently needed projects on hold. The grants will support many jobs in the historic buildings and conservation sector and protect much needed craft skills. The focus of the grants is on urgently needed repairs and works to enable buildings to remain open and in use for worship and as places of prayer. Every one of the churches and cathedrals being supported has an important and unique story to tell about their history and the contribution these glorious buildings continue to make to their congregations and to the wider community.

This is what we said about the architecture and heritage of our ‘winners’: 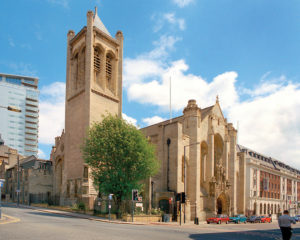 Leeds Cathedral (Grade II*) opened in 1904 as the cathedral church of the Diocese of Leeds. Ever since it has been widely regarded as an outstanding example of Arts and Crafts design and craftsmanship, both internally and externally. It is one of very few Catholic churches built in this style and was designed by JH Eastwood, assisted by SK Greenslade. The interior includes works by JF Bentley, CTG Formilli, Boulton and Sons of Cheltenham and HH Martyn & Co of Cheltenham. The Cathedral is located in the Civic Quarter of Leeds city centre, close by Cuthbert Broderick’s Leeds Town Hall (1858) and Leeds Civic Hall (1933), designed by E Vincent Harris. It is one of the most important elements of the city’s religious and architectural heritage.

St Joseph’s, Pontefract (Grade II*) is the oldest church in the Diocese of Leeds and dates back to 1806, more than twenty years before the Catholic Emancipation Act. In that context it is an important and relatively unaltered example of an urban pre-Emancipation Act Catholic church, which from the outside resembles other contemporary non-Anglican places of worship.  It replaced a Mission at Carleton Green founded by the Jesuits in 1685. The parish at Pontefract was served by the Jesuits until 1888 when responsibility was transferred to the clergy of the Diocese of Leeds. The architect of the church is unknown. It was extended in 1833 and subject to minor alterations in the 20th century. The interior contains no original fittings but it retains its early 19th-century character. The church is located close to Pontefract town centre and is included in the Pontefract Market Place Conservation Area.

St Wilfrid’s, Ripon (Grade II*) is recognised as one of the finest Catholic parish churches in England. Designed by JA Hansom, St Wilfrid’s opened in 1862 and was consecrated in 1912. In 1909 fittings from the private chapel at nearby Studley Royal were transferred to the church following the death of the First Marquess of Ripon, former Viceroy of India. These include ten stained-glass windows by John Hungerford Pollen installed along the north and south aisles and dating from 1878. The sanctuary was remodelled following the Second Vatican Council (1962-65) although the ornate reredos designed by EW Pugin remains unaltered.

News from the Universe!