Advent Anniversaries for our Permanent Deacons

The Chapel of the Holy Family at Hinsley Hall was the venue for a special celebration on the evening of Wednesday 11 December to mark 25 years since Rev David Arblaster and Rev Keith Ballard were ordained to the Permanent Diaconate. Their ordination by Bishop Konstant took place at the Cathedral on the Feast of the Immaculate Conception, 8 December 1994. This event was commemorated with Mass celebrated by Bishop Marcus, during which two other men who were also ordained Deacons on the same day were remembered: Deacon Malcolm King, who died in 2011 and Deacon Tom Marshall who died in November 2019. Our picture shows the Bishop with Deacon Keith from Huddersfield on the left, and Deacon David from Harrogate on the right. 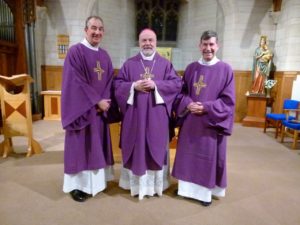 It was also an occasion to congratulate Deacon Edwin Murphy, who celebrates his ninety-ninth birthday, and the start of his hundredth year, on 21 December. Deacon Edwin, from St Edward’s parish, Clifford, is pictured below with Bishop Marcus and the Jubilarians. He is now the longest-serving Permanent Deacon in the Diocese, having been ordained in December 1993.

To one and all, Ad multos annos! 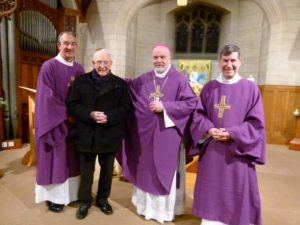 The Bells Ring Out for a Ruby Anniversary