On Sunday 30 August 2020 the Parish of St Mary in Bradford celebrated a special Mass to remember the 80th Anniversary of an event which could have spelled disaster for St Peter’s Church in Laisterdyke. In addition to ringing the Angelus before Mass and tolling the church’s bell in remembrance afterwards, parishioner Andy Joyce has written an account of the night of 31 August 1940 based on the recollections of his father and other relatives who were among the parishioners rallying together to save their church in the dark days of the Second World War …

For most people in Bradford, the war had become a way of life, each going about their daily business. Men had been called up, the women working in munitions factories, or looking after children and generally making the best of a bad situation. Nobody could have imagined how close to the war the people of Bradford would come, especially the locals of Laisterdyke.

Saturday 31 August had been a normal day. Work, chores and errands had been done and most people had settled down to a Saturday evening or were retiring for the night, not knowing what the next few hours would bring.

At around 10.10pm reports had come into the local ARP base that enemy planes had been detected and were heading towards Bradford. Minutes later, the air raid siren sounded, and one can only imagine the reaction. For some it was just another siren, after all, nothing had ever happened before. For some, it meant panic and dashing to cellars to take cover.

Just over twenty minutes later bombs started to fall on Bradford, from as far West as Thornton Road, to as far East as Laisterdyke. For over four hours a total of more than 116 bombs and incendiary devices fell upon the city.

When the all-clear had been sounded and people started to come out of their shelters and houses, many people commented that it smelt like the morning after ‘Plot night’. Only what they saw was much worse.

For the parishioners of St Peter’s, the war had come to their church, which was only 7 years old at the time; they saw the church had received a direct hit. Thankfully, the bomb had not exploded, but the damage it had done was nonetheless catastrophic.

The bomb had created a crater in the floor which was nine feet deep and twenty feet wide and parts of the solid oak benching were embedded in the roof. All the electrics had been destroyed and the organ had been severely damaged. To make things worse, there was another unexploded bomb just outside the grounds which meant the nuns (Sisters of the Cross and Passion) whose convent was to the right of the church, had to be evacuated.

Although the church was out of use, this did not stop Masses being celebrated, and on that very Sunday morning, the Mass schedule (there were at least four Sunday morning Masses in those days) continued as normal in the school hall, which had previously been used as the parish church.

Fr Daly, later to be made Canon, had only been Parish Priest for a few months; now he had the task, along with his curates, Fr Moriarty and Fr Hegarty to rescue the church and parish. On first inspection it was reported in the local newspaper that the damage was so severe that the church would have to be demolished. This must have been an horrific blow to the parish, but thankfully in the weeks that followed a detailed survey was undertaken, and it was found that the church would not need to be demolished after all.

Fr Daly did not waste time in getting the church repaired. The three priests visited other parishes in the diocese, often preaching and explaining what had happened and within a few months they had managed to raise £2,000, the equivalent to £113,000 in today’s money. It was a massive undertaking, and by Christmas 1940 the church was restored and fully open, although later war damage could not be put right until after the war.

In this 80th anniversary year of the bombing, we give thanks to God, that our beautiful church still stands and we are reminded of the words Jesus said to Peter: ‘You are Peter and upon this rock I will build my Church and the gates of the underworld can never hold out against it.’ 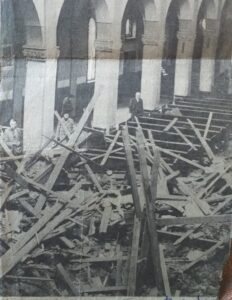 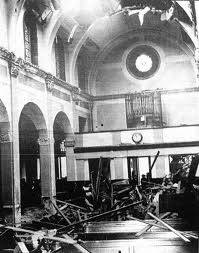 Words of Appreciation for our ‘Year of the Word’