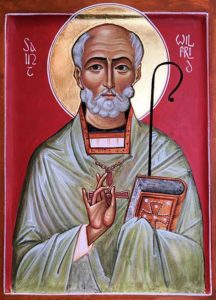 Wilfrid was a native of the Saxon Kingdom of Northumbria which covered most of northern Britain and parts of Scotland.  As with so many of our English-speaking saints, St Bede’s writings bring Wilfrid’s character to life. Well-travelled and feisty, Wilfrid became a monk on the Island of Lindisfarne, spent time in Canterbury, several years in France, was Abbot of Ripon, founded a monastery in Hexham, and became Bishop of York.  He is thought to be the first native Englishman to make a pilgrimage to Rome.

Making powerful and persuasive arguments in favour of Rome’s method of calculating Easter at the Synod of Whitby in 664, he was – like so many saints – a controversial figure in his day.  Often in dispute with kings and clergy alike – and even with fellow saints – St Wilfrid spent time in exile.  On his travels, he converted many pagans, founded churches in Sussex and the Netherlands and more than once journeyed to Rome to defend his position.

In 672, whilst Wilfrid was abbot of the monastery at Ripon, he built a new stone church dedicated to St Peter.  After his death in 709, Wilfrid’s body was buried in his church ‘close to the altar on the south side’.  His shrine became an important destination for mediaeval pilgrims.

Of St Wilfrid’s original church, only the Saxon crypt beneath the present Ripon Cathedral remains.  The crypt may have been intended to represent Christ’s tomb and the large niche there probably contained the relics of saints which Wilfrid had brought back from Rome.  Initially moved to Canterbury, the location of St Wilfrid’s own relics is now unknown – but more than bones or ancient stones, St Wilfrid’s is a living legacy: he introduced the Benedictine Rule to English monasteries, and promoted the use of sacred music and plainchant which is still part of today’s Church.

O God, who endowed the Bishop St Wilfrid
with outstanding graces for the building up of your Church,
grant that by the help of his prayers
we may, like him, weather every storm,
discords at home and perils overseas,
and be brought at the last into the haven of your peace.
Through our Lord Jesus Christ, your Son,
Who lives and reigns with you in the unity of the Holy Spirit,
One God for ever and ever.  Amen.