Around fifty people gathered at Leeds Catholic Cemetery, Killingbeck today to remember David Oluwale: a British-Nigerian who was last seen exactly fifty years ago, in the early hours of 18 April 1969.

His body was found at Knostrop Weir, in the River Aire, on 4 May.

In 1971, two Leeds police officers were acquitted of his manslaughter, but imprisoned for assaulting him.

David had spent many years in High Royds Psychiatric Hospital and living rough on the streets of Leeds where he experienced repeated police harassment and assaults.

As well as Board members of the Nigerian Community in Leeds, distinguished local musicians and poets who sang and recited their own verses based on David’s story, and local and regional press and media, also present at David’s graveside today were two senior members of West Yorkshire Police – both of them from Catholic families.  One was Chief Superintendent Steve Cotter, the other was Detective Superintendent Carl Galvin.  Carl’s father was the late Gary Galvin, then a young police cadet who in the early 1970s courageously spoke out against the senior policemen who had been David’s persecutors, and whose testimony enabled them to be brought to justice.

Only the priest was at David’s interment when he was laid to rest in a pauper’s grave in Leeds Catholic Cemetery.  When his body had been recovered from the river, among the few meagre possessions found in the pockets of this homeless and vulnerable man was a Rosary.

The charity Remember Oluwale aims to educate the city of Leeds in coming to terms with its past, improving its care for those who remain marginalised, and promoting equality, diversity and racial harmony.  Board members John Battle and Dr Max Farrar organised this memorial in Killingbeck as part of a week of events to mark the Fiftieth Anniversary of David Oluwale’s death.

All these events – some secular, some religious – were planned to coincide with Holy Week: a time when we commemorate the Passion and death of Our Lord; and an appropriate time to remember all those who are persecuted to death through a Travesty of Justice. 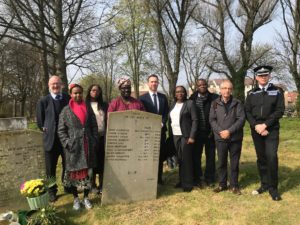 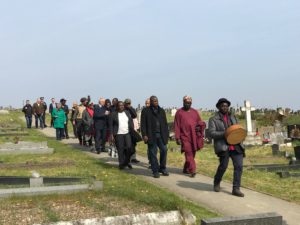 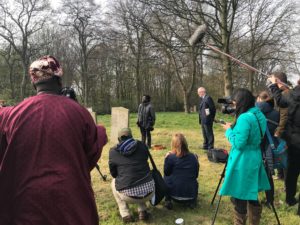