Pope Francis will mark the first International Day of Human Fraternity in a virtual meeting on 4 February, the date set by the United Nations General Assembly for this new annual occasion.

The meeting will be streamed in several languages starting at 14:30 (Rome time) 13.30 (GMT time) by Vatican News, the multimedia information portal of the Holy See, and broadcast by Vatican Media.

The Holy Father has encouraged joining in the celebration of International Human Fraternity Day, In the January edition of the Pope’s Video, “At the service of human fraternity,”  he highlights the importance of focusing on what is essential to all faiths: worship of God and love of neighbour. “Fraternity leads us to open ourselves to the Father of all and to see in the other a brother, a sister, to share life, or to support one another, to love, to know,” Pope Francis emphasises in the video.

The 4 February event is hosted from Abu Dhabi, in the presence of the Sheikh Mohammed Bin Zayed and the Grand Imam of Al-Azhar (Cairo), Ahmad Al-Tayyeb. The date and place are no coincidence: on 4 February 2019, during an apostolic journey the Pope made to the United Arab Emirates, he and the Grand Imam signed the Document on Human Fraternity for World Peace and Living Together, having spent many months drafting the Document together.

This was an antecedent to Pope Francis’ Encyclical Fratelli tutti in October 2020 and two months later, the United Nations General Assembly unanimously declared 4 February as International Day of Human Fraternity. Judge Mohamed Mahmoud Abdel Salam, Secretary General of the High Committee of Human Fraternity said, ‘In this decisive phase of human history, we are at a crossroads: on the one hand, universal fraternity in which humanity rejoices, and on the other, an acute misery that will increase the suffering and deprivation of people.’

A Pontifical Council for Interreligious Dialogue was instituted in 1964 by Pope Paul VI with the aim of working on relations and dialogue between the Catholic Church and the faithful of other religions. The Council’s current President (Cardinal Miguel Ángel Ayuso Guixot MCCJ) has said of the inaugural Day of Human Fraternity, ‘This celebration responds to a clear call that Pope Francis has been making to all humanity to build a present of peace in the encounter with the other. These meetings are a way to achieve true social friendship, as the Holy Father asks of us.’

The Higher Committee of Human Fraternity, established to translate the aspirations of the 2019 Human Fraternity Document into concrete actions fostering fraternity, solidarity, respect and mutual understanding is made up of different international religious leaders, scholars and cultural leaders dedicated to sharing the message of mutual understanding and peace. Their current plans include an Abrahamic Family House, with a synagogue, a church and a mosque, on Saadiyat Island, Abu Dhabi. It established an independent jury to receive nominations for the Zayed Award for Human Fraternity and choose winners whose work demonstrates a lifelong commitment to human fraternity. The 2021 prize will be awarded on 4 February.

The values of mutual respect and peaceful coexistence are, however, not confined only to the international scene. There is just as great a need within our own home, family, community, parish and diocese to remember that we are all brothers and sisters in Christ; to take it to heart and to live it out in our own lives. 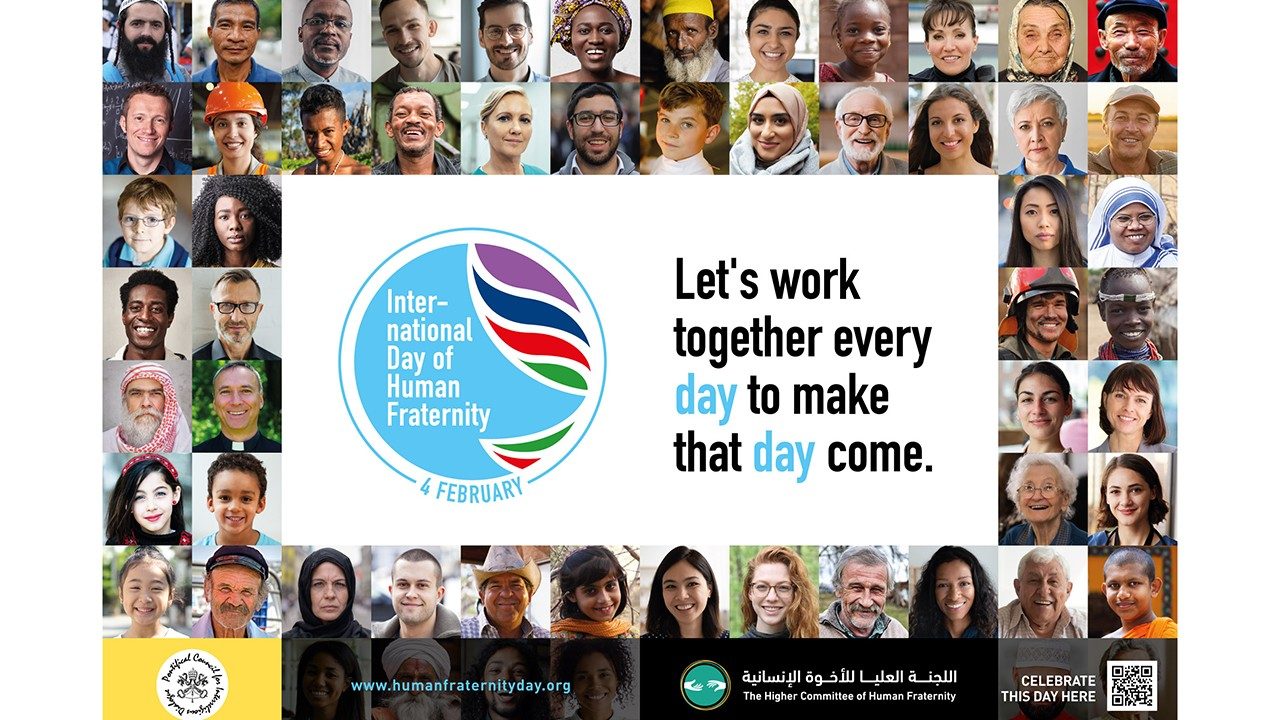 Bishop asks for Prayers for our Consecrated Brothers and Sisters

Giving ALL Children a Voice!