From Venerable to Vulnerable – a 60 Year Journey

From Venerable to Vulnerable – a 60 Year Journey

In a few weeks’ time (on 29 October) Fr Gerald Creasey embarks on his sixtieth year of priesthood. He was ordained in Rome on that day in 1961, one of the last priests in the Diocese to be ordained before the Second Vatican Council. In recent months Fr Creasey has been in reflective mood, looking back over the past sixty years – and more. In part this was occasioned by the ‘lockdown’ he and others experienced during the spring and summer of 2020. This resulted in him putting pen to paper and compiling a memoir that looks back on the several stages of his long life – a schoolboy at St Michael’s College in Leeds in the 1940s, a student at Durham University in the early 1950s, seminary studies at the English College in Rome in the late fifties and early sixties, and  his years as priest and teacher since that time. It’s also an opportunity to read how the Creasey Papers now form a unique collection in the archives of the Venerable English College in Rome 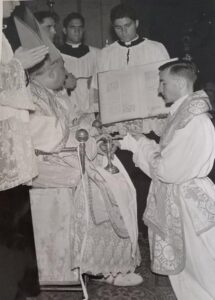 Our picture shows Fr Creasey during his Ordination in 1961, which was performed by the late Cardinal Luigi Traglia.

A copy of From Venerable to Vulnerable can be viewed or dowloaded below:From Ven to Ven (GC 2020)