Children and staff at Christ the King Catholic Primary Academy in Bramley have marched a mile a day for a whole week to raise funds for people affected by the humanitarian crisis in Ukraine!

The walk took place safely around the school’s beautiful grounds, which include areas for playing and for praying. It was sponsored through the generosity of parents and members of the local community in Bramley – and along with Fr Neil Byrne’s parishioners’ fundraising at church, the grand total so far is well over £3,000 and rising! 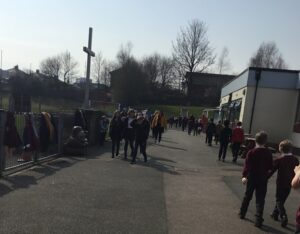 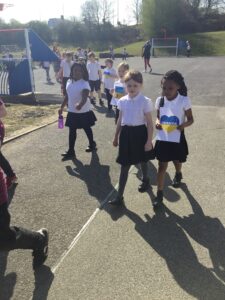 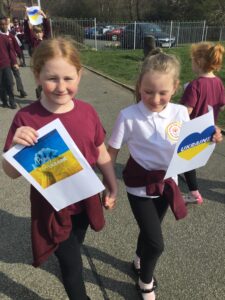 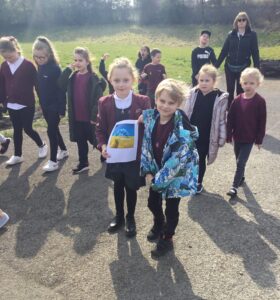 Although the ‘march’ was in the hope of a peaceful resolution to crisis in Ukraine, some of the children and their teachers later enlisted the support of England’s Patron ‘Soldier Saint’, as they led the whole school in Collective Worship for St George’s Day.

As well as explaining why they were giving their worship the focal points of a Cross, candle and Bible, the children waved the English flag of St George as they threw themselves into a spirited version of the Katy Perry chart-topping hit ‘Roar’ – complete with actions to inspire courage: the Christian Virtue of Fortitude! 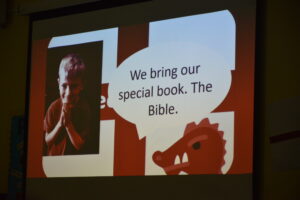 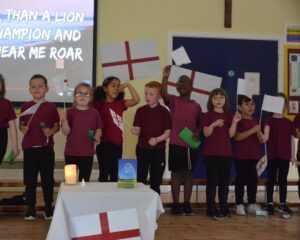 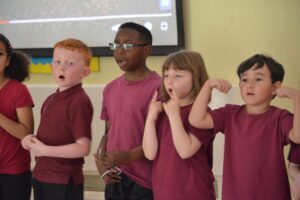 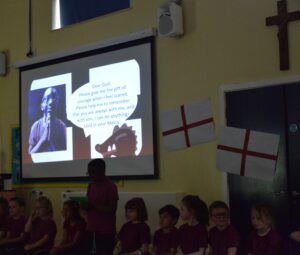 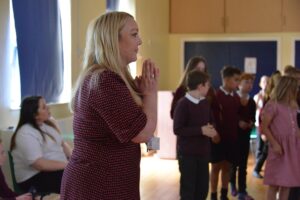 Christ the King School is at the heart of the parish and community in Bramley, and is a school within the St Gregory the Great Catholic Academy Trust. It richly deserves the ‘Good’ rating given in their recent Ofsted Report, which noted that:

‘Parents say that Christ the King Catholic Primary is not just a school; it’s a family!’