More of Our History from the Pen of Fr Nicholas

Our Fathers of Faith

Often wishing that we’d asked more questions of a generation no longer with us to glimpse an insight into how lives were lived in a different time, a wonderful insight has been given into the lives of a one-time familiar presence within most of our local communities – the Catholic priest. For most they were men often surrounded by a sense of mystique whilst to others they were family. Having produced biographical sketches of over 200 priests ordained c.1915 – 1939 who served within the West Riding, Fr Nicholas Hird’s eleven year project has produced insightful and surprising stories of men behind the clerical collar.

Amongst them are Belgian refugee priests, forced from their homeland during the Great War and who continued to preach to their countrymen from borrowed pulpits. There is also the story of two powerful vocations, priesthood and marriage, colliding. Love of a woman, whom he met in Halifax, caused one man to leave his ministry in the Catholic Church but then a subsequent pull of his clerical vocation led him to spend over forty years serving a different faith tradition as an Episcopal Minister. Another priest’s passion for golf brought him into contact with entertainment-nobility and astronauts. Fr Paddy Roche  was Chaplain to the Ryder Cup Team, present at the launch of both Apollo 16 and Apollo 17, and as a token of friendship he was given one of the two golf balls famously hit by Alan Shephard on the moon’s surface in 1971.

A relative of Arthur Conan Doyle, Monsignor Richard Barry Doyle ministered in Brighouse where he entertained audiences with illuminated talks during the dark days of the First World War before serving as a Chaplain to the Forces. Later he was dubbed the ‘Children’s Crusader’ for the work he undertook to relieve poverty caused by the Greco-Turkish War, being granted an audience with the last Ottoman Sultan, Mehmed VI. He also met President Coolidge, during his bid to raise a million dollars for the starving of Asia Minor. Sadly he left America worn down by the criticism he received from the Irish-American clergy who resented him wearing the costume of a British colonel replete with British, French, Greek and Russian insignia.

There are tales of tragedy and heroism. Young clergy whose lives were cut short through the absence of antibiotics, and a Military Chaplain, Fr Bernard Benson  from Bradford who had served in North Africa, Sicily and Italy, whose life was lost at Arnhem during Operation Market Garden. With plentiful numbers of clergy in Ireland many began their ministries on loan to the Diocese of Leeds. With some of these being little more than names in dusty registers, the remainder of their story is told, acknowledging the subtle way in which their experience of life in Yorkshire continued to influence them. One established a scout troop in Dublin insisting the boys wore the colour of uniform worn by David Moffatt, one of the Cockleshell Heroes of 1942, whom he had known during his curacy in Halifax.

Other stories reflect the numbers of men and women from single families who became priests or nuns, such as Monsignor Dermot Scannell who was one of five brother priests who hailed from Selby, including Fr Kevin Scannell who was an internationally acclaimed expert on GK Chesterton, whose own literary character Fr Brown was based upon a Heckmondwike-based priest, Fr John O’Connor.  Acknowledgement is also given to the overriding number of priests who came from Ireland, with a nod to Belgium, America, Scotland and New Zealand whose sons also served the people of Yorkshire.

The two volumes emphasise a character-filled Presbyterate who predominantly served the Catholics of the old West Riding area. Amongst the notables are a man who threatened to take his grievances with the first American Abbot-Bishop – about unpaid debts and reneging on promises – to the press, and another who fought in the Easter Rising of 1916 under Countess Markievicz. He was subsequently imprisoned in England, and in later life answered his vocational call which brought him to Leeds. In death he lies buried in the Republican Plot in the historic Glasnevin Cemetery in Dublin, the authorisation for which came directly from the Irish Taoiseach, Eamon de Valera, who also attended his Funeral Mass.

Whilst the majority of these men never made the headlines (although there is a story of an illegal lottery !) their presence in the lives of the Catholic communities they served made a difference at times when it mattered, not least in celebration and sadness. Some were church builders, others stewarded existing landmarks, whilst some ministered in temporary and obscure locations. Their lifespan takes the reader from the Victorian era to the early days of a new millennium; without doubt a period of social upheaval and vast change in so many areas of daily life. Yet the constancy of these men amidst change was admirable and brought security and stability to many. In a time when the closure of places of worship is increasingly commonplace it is good to look back and recall those who were the beating heart of integral aspects of the landscape of cities, towns, streets, and rural areas.

Volumes 3 and 4 of Our Fathers of Faith comprise over 600 pages and are largely illustrated with images of the clergy, and are fully referenced for those wishing to develop their own research. Copies can be obtained directly from Fr Nicholas Hird by e-mailing him on nicholas.hird@dioceseofleeds.org.uk or by telephoning 01274 872984. The cost is £25 for the two volume package. 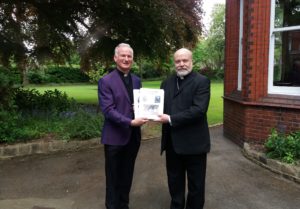