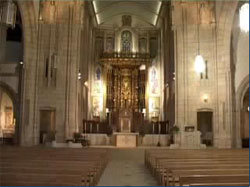 My relationship with, and affection for the Cathedral Church of St Anne at Leeds began in 1988 as a young architect and assistant to Donald Buttress, producing detailed plans, sections and elevations of the building based on the original Eastwood drawings. Unbeknown to me at the time, these drawings were to form the basis of our ongoing work over the next twenty years.

The production of the drawings and the survey works carried out during the process provided me with the opportunity to study the building in intimate detail, to discover little nuances of the original design and some of the lesser known and delightful carved details Eastwood uses in masonry and joinery not immediately visible due to the poor lighting and dirt engrained stonework. Twenty years later, I still find surprises and delight in the building. I am indebted to Mgr Peter McGuire, who as Administrator of the Cathedral in the late 1980’s and 1990’s was of great assistance and support during the restoration of the external fabric of the building.

The cathedral is a splendid example of the English Arts and Crafts movement that was at its peak around the turn of the twentieth century and which produced a very rich and original body of work that is becoming increasingly admired and studied. Having chosen the Arts and Craft movement as the subject of my dissertation at university, I could not think of a more fitting building to have worked on since qualifying as an architect. Although little is known about the work of Eastwood and his professional relationship with Greenslade, the two designers of the present building, the results of their collaboration at Leeds is a wonderful testament to their artistic skill, commitment and faith.

As with all buildings that survive the test of time, they have to be able to adapt and change to meet the demands of modern life. The cathedral is no different, and in its first hundred years of life has been progressively altered and re-ordered to meet the needs of a changing liturgy, city centre congregation and latterly, the requirements of Vatican II. This has resulted in some fairly significant changes to the interior and the loss of much of the original decoration particularly in the Sanctuary and Blessed Sacrament Chapel as well as many of the original fittings and furnishings elsewhere in the building. 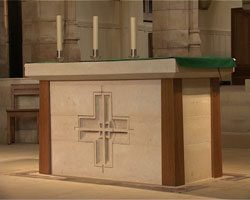 The new reordering and restoration of the interior has been painstakingly designed and produced by a large team of people under the close direction of Bishop Arthur Roche and assisted by Canon Michael McCreadie, Fr. Martin Kelly and the Diocesan Property Administrator, David Damant. Again, I am indebted to them for their patience, guidance and support during the process. Additional useful advice has come via the members of the Art, Architecture and Heritage Committee and the Historic Churches Committee in the Diocese of Leeds.

We were charged with the task of creating a dignified place of worship worthy of the Mother Church of the diocese and to restore the original Eastwood interior details where possible. All new work was to compliment the existing character of the cathedral and to form a unified whole when complete.

The design focuses around the relocated Sanctuary with the new Altar at its centre, and at the very heart of the church, directly visible by as many worshipers as possible, with the new Ambo and Cathedra close by and clearly forming part of the liturgical grouping.

Each of the new elements has been designed using a simple vocabulary of stone and oak, the same materials used in the construction of the cathedral, with each piece detailed to embody appropriate symbolism and using some of the principal detailing adopted by Eastwood elsewhere in the building but with a contemporary character reflecting the age in which the items were produced and the needs of the modern liturgy. 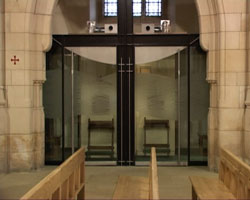 From seeing the building in its stripped-out form, with no floors, lighting, Altar or life, we have watched the gradual transformation take place. The cleaning and repair of all the stonework transformed the quality of natural light in the building. The archaeology to discover the original decorative schemes for the ceilings has allowed them to be reinstated. The introduction of a York stone floor as originally intended by Eastwood along with an under-floor heating system means the building is free of the plethora of pipes and radiators and will result in a comfortable place to worship all year round. The gilding of the Greenslade reredos has been restored to its original splendour. The lighting has been upgraded to complement the liturgy and to accentuate the architecture of the building. New confessionals that allow both the traditional form and face-to-face confession have been created.

New purpose-designed oak pews have been installed in the nave and transepts. Relocation of the choir to the east end of the cathedral has allowed us to retain the seating capacity in the cathedral despite the projection of the new sanctuary into the nave. The font has been repositioned onto the main axis of the cathedral and the new baptistery created around it at the west end. Finally and most importantly, the new Altar, Ambo and Cathedra have been installed in the Sanctuary. We now await the dedication of the new Altar when the project that was originally discussed as a concept over twenty years ago will be complete. The building will once again, become the centre of worship and devotion in the Diocese of Leeds.