The International Conference “A Politics Rooted in the People” was an online event which took place on 15 April, and organised principally by the Centre for Theology and Community, the Catholic Campaign for Human Development and the Katholische Hochschule für Sozialwesen in Germany. However, there was a strong presence and input from people with a community organising background (people active in Citizens UK, for example) but also from Ireland, Italy, Portugal and the United States of America.

There were various elements to the conference but one was led by Jessica Wilkinson, Youth Coordinator for the Leeds Diocese, along with Tom Chigbo (Senior Organiser for Leeds Citizens) and Rev Dr Joe Cortis (who heads up Caritas Leeds). Youth Officer Ryan Wilkinson had put together a video about the group known as ‘The Twelve’. This is a group of young adults and older children who have been meeting regularly throughout lockdown to explore their faith and dialogue with Bishop Marcus about the issues that are important to young people. A lot of positive comments were received about this video and the workshop itself. The vidoe can be accessed here  https://youtu.be/0WKOdif6unw

The conference theme was based on the title quote by Pope Francis (included in the book ‘Let us Dream’) and was all about how we reinvigorate a ‘Politics for the Common Good’. Pope Francis made a short video for the conference expounding this theme that politics ‘must not be for the people but with the people’. He encapsulated this idea with the phrase ‘inclusive populism’ – to distinguish it from the narrowly nationalistic trends that are seen in a number of countries today. It is about ‘securing a life for all people that is worthy of being called human’. This is something that cannot be done without taking true account of the culture and social values of communities.

Twelve months ago a group of lay faithful and clergy gathered under the auspices of Caritas Leeds and voted for a focus on youth leadership as a priority for 2019. This took place within the context of the ‘Synod of Young People, the Faith and Vocational Discernment’ (Rome 2018).

A group of interested individuals has been established to work specifically with the support of Bishop Marcus on developing youth leadership in our Diocese.

A number of young Catholics have been recruited to form an inaugural group. The Diocesan Youth service, school chaplains and parish based youth workers together nominated a core group of young people who met the following criteria: Catholics aged 13-18, with some track record of commitment to service in their parish, school or another Catholic agency; all with full parental written consent. The inaugural group consists of 7 girls and two boys from different secondary schools/ sixth form colleges and parishes. The group has taken the title of: ‘The Twelve’ to be inspired by the small group of apostles who, empowered by the Holy Spirit, transformed the history of the world when they took Christ’s Gospel to people all over the earth’.

Once the above was secured Caritas Leeds in Partnership with the Diocesan Youth Service and Leeds Citizens (a chapter of ‘Citizens UK’-a charity focusing on mobilising social action) facilitated regular meetings with this group directed by the principles of: facilitation, formation and fellowship.

It was crucial that the young people got to know each other using games, sharing a meal and social activities.

They were given an overview and analysis of the structures of the Diocese and different roles within and statistics as produced annually for the Diocesan Year Book. They were also encouraged to express their fears, worries and concerns but also their hopes, dreams and expectations.

Targeted exercises explored the radical concept of leadership particularly drawn from   scriptures and the life of the Saints. One effective exercise was ‘The flying pattern of geese’ (through the ‘V’ formation of flying the whole flock adds 71% greater flying range than if each bird flew alone), developing a sense of common direction, taking turns in doing the hard tasks and also to stand by each other in difficult times as well as when strong.

Negotiation skills were explored through role play. The group were facilitated to put forward a structured proposal to the adults facilitating this group, playing key diocesan roles such as the Bishop, Chief Operating Officer and Finance person.

Bishop Marcus held a first meeting with ‘The Twelve’ on Sunday 24th. November at Wheeler Hall-Leeds. His Pastoral letter for the Feast of Christ the Universal King-National Youth Sunday drew attention to this new initiative of the Twelve: Young Leadership Project and the inaugural members were formally commissioned by Bishop Marcus during the 11.00 Mass at Leeds Cathedral. Through this formal commissioning the young people gave their public commitment to:

Caritas Leeds, the Diocesan Youth Service and ‘Leeds Citizens’ will continue to support this group in fulfilling what they have publicly committed at their commissioning.

As Bishop Marcus stated in his Pastoral letter: ‘Please pray for these young people who will form part of ‘The Twelve’, and pray for all the young people of our diocese. May their love for Christ, our King and Lord grow ever stronger; their friendship with Him never be broken, and the hope which He inspires always be a light within them and for all around them’. 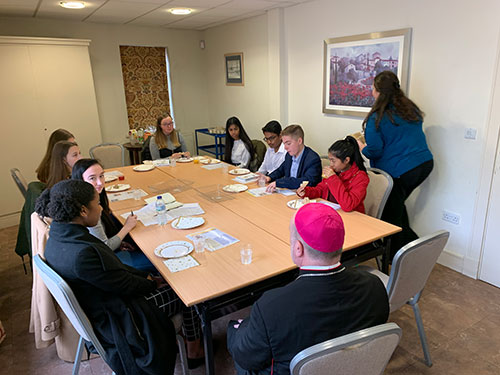 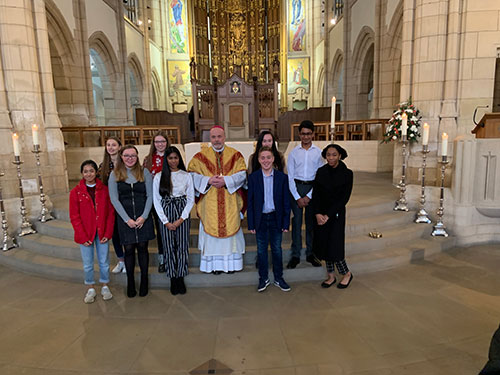