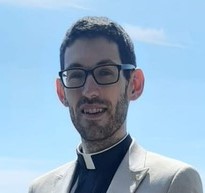 My Name is Marc Pitson and I am a seminarian for the Diocese of Leeds currently undertaking a pastoral placement in the Parish of St John Mary Vianney, Leeds. I’m originally from Hull, I moved to Leeds in 2011 to study Theology at Leeds Trinity University. It was during my time there that I converted to Catholicism and really began to think about my vocation.

I was brought up in the Church of England and at the age of 16 began to think about a possible vocation to ministry. However, due to my young age I decided to first attend University. During my time at Leeds Trinity, I got involved with the Chaplaincy and became more and more interested in Catholicism, this eventually led to my being received into the Church.

After graduating University I got an office job for a number of years so that I could settle in to being a Catholic as well as further discern my vocation. It was during this time that I felt more and more that God was calling me to the Priesthood, however, I wasn’t sure how or where. Therefore I took the opportunity to visit a number of religious communities as well as attend the diocesan vocations group. After a number of years I decided to apply to join the Dominicans. I was accepted and began my noviciate. While I was a Dominican I began to feel that God was calling me back to Leeds Diocese and the more I discerned the more I felt that God wanted me to be a diocesan priest. I continued to discern this call within the Dominicans and eventually I contacted the Diocesan Vocations Director and was accepted as a seminarian for the Diocese of Leeds and sent to Rome to finish my studies.

Please be assured of my prayers for you all and please pray for me and for all those discerning their vocations.