Our churches and chapels are the focal points of the local Catholic communities that together make up the Diocese of Leeds. Many of these places of worship are significant architecturally or house notable examples of church art. All of them have interesting stories behind them, in some cases from the days before Catholic Emancipation; in others from the years of Irish migration to England in the mid-19th century. Elsewhere the story begins in the expansion of the suburbs, especially after the Second World War.

Below is a list of all the churches in the Diocese at the present time. It is arranged in chronological order, from the oldest (1806) to the most recent completion in 2001.

Chronological List of Churches in the Diocese of Leeds

Further information about the history and architecture of churches in the Diocese of Leeds can be found at: www.taking-stock.org.uk

The present-day care of all our churches is a responsibility of the Art, Architecture and Heritage Committee of the Diocese of Leeds. Where a church is a Listed Building this is also a matter for the Historic Churches Committee. Further information about the work of these bodies can be found in the Property Department section of the Diocesan Website.

From our Archives and Heritage 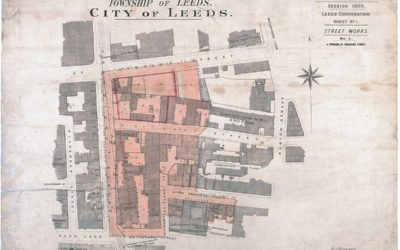 The plan shows the location of the first Cathedral Church of St Anne (built in 1838) which stood at the junction of Cookridge Street and Guildford Street (now The Headrow) and the site of its replacement, outlined in red. 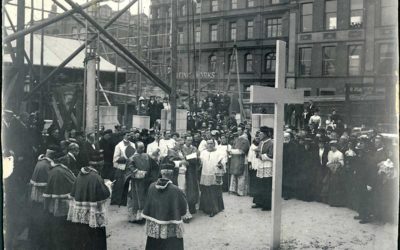 The Foundation Stone of the new Cathedral was laid on the Feast of Ss Joachim & Anne, 26 July 1902. It now forms part of the War Memorial Chapel on the north side of the Cathedral. 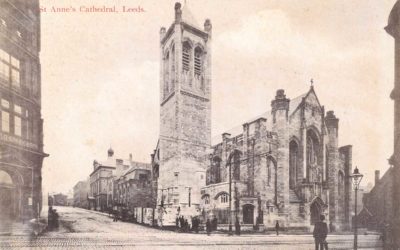 An early postcard view of the new Leeds Cathedral, which was officially opened on 16 June 1904. The Consecration took place on 18 July 1924. The interior of the Cathedral was re-ordered in 1963 (during the Second Vatican Council) and most recently in 2006.