Mike Forbester was a lay-clerk at Leeds Cathedral and together with Fr Richard Aladics, founded The Rudgate Singers in interesting circumstances …! Twenty-five years on, and now based in York, the choir is still going strong and the Singers celebrated their Silver Jubilee with a Mass in the Chapel at Ushaw with clergy from the Diocese of Hexham and Newcastle – but, as Mike reminisces, the origins of the choir are very much still in the Diocese of Leeds…!

Many years ago, having returned to York from University, where I had the opportunity to sing in two Cathedral choirs, I searched in vain for a local parish with reasonable music where I might settle down. Eventually I ended up commuting  25 miles each way to Leeds, initially to join the Leeds Schola Gregoriana for their monthly Ordinary Form Chant Masses, and ultimately joining the Cathedral Parish and eventually the Choir, where I remained for over 10 years.

The musical education gained there, led me to wonder why the great choral music of the Catholic Church – particularly Mass settings – couldn’t be heard more often and in their entirety. (The diet at that time being bits of a Mass setting each week, motets – either of which could be in Latin or the vernacular – and responsorial type music.) To hear a complete Mass setting, you had to either buy a CD, go to a concert, or visit an Anglican cathedral!

The chance to reverse this trend came in the most unusual circumstances in Rudgate Prison where I used to work. I had already arranged for a group of singers to sing some services there, liaising with the Catholic Chaplain, Fr Richard Aladics, whom I knew because he had served at the Cathedral. Shortly after one of these, we were having a chat in my office, and soon started making plans for a sung Mass in the historic Chapel of the Immaculate Conception at Scarthingwell in the Diocese of Leeds. Having longed to sing Palestrina’s Missa Papae Marcelli, this was the perfect opportunity to do so!. Between late 1995 and June 1996, the date of the Mass, my sister and I managed to recruit a choir of over 20 singers for what we believed would be a one-off or at best, an annual occasion. The day was a huge success, Mass being followed by the choir, clergy, servers and several members of the congregation visiting the local pub for lunch before returning to the church for Vespers and Benediction!

What we thought was going to be a one-off occasion, obviously didn’t turn out to be the case! Later in the same year, we were invited to sing for Latin Mass Society’s Annual Requiem in Leeds Cathedral, a chance to sing another of my all-time favourite pieces of music, Victoria’s six-part setting of the Requiem Mass. I remember one of the Cathedral clergy remarking to me after Mass the following day, ‘That was very good, but you know, you shouldn’t really be getting involved in the Old Mass, there’s no future in it!’

The choir continues to this day, singing music from Gregorian Chant to the present day, always in the original liturgical context for which it was written. We remain an ad-hoc choir, drawing on a pool of volunteer singers from all over the country, though the majority are based in the York area. Membership isn’t just restricted to Catholics. Over the years, we’ve had Anglicans, Methodists, Greek Orthodox and even a Buddhist sing with us, as well as people of no church affiliation at all, who join us because they simply like the music we sing and appreciate its proper setting.

To date, we have sung in churches throughout the North of England, including cathedrals in Leeds, Sheffield and Newcastle as well as Brinkburn Priory in Northumberland. The undoubted highlight has to be the historic Mass in York Minster, believed to be the first Traditional Missa Cantata sung there since the reign of Queen Mary I!  We were also the first choir in Europe to perform a Mass composed by the talented young American, Jeff Ostrowski, whose work I cannot praise highly enough, particularly with regard to the Traditional Liturgy.

The separate Schola Cantorum began as an idea that I’d had some years ago. I already knew of chant groups on Tyneside, in West Yorkshire, and in Nottinghamshire and Lincolnshire – and I had often wondered why such a group didn’t exist in the York area, especially given the importance of this city in musical matters. The Schola has sung with the main choir several times so far, and also independently, most notably at Ushaw College during the LMS Priests Training Conference earlier this year, Barnard Castle for the Annual Founders-Day Requiem Mass, and at St Mary’s, Bishophill Junior, the oldest church in the City of York.

How we came to take up part-residency in an Anglican church will have to be told another time…! I am now a key holder, and thus have virtually unrestricted access to one of York’s most historic churches. We still sing the traditional Catholic Office there on a regular basis, and recently have sung the entire Office of the Blessed Virgin Mary in a single day. Other notable events the Schola has been involved in include singing the Solemn Salve Regina written for the monks of St Mary’s Abbey in York, actually in situ for the first time since the Abbey was dissolved at the Reformation. We were also the first group of singers in Europe to sing 21st Century Gregorian Chant, composed in the USA for the Feast of St Maria Goretti.

It may come as a surprise to some people to discover that we don’t actually audition; we just work hard! Rehearsals take place only when we have a service to prepare for, an arrangement that works as it doesn’t tie singers into travelling long distances on a regular basis. The rehearsals usually start about three or four weeks before a service and are held in York, as this seems to be a convenient location for most people.

Members sing with us knowing that they will be incurring their own travelling expenses though we do provide transport and car-pooling, so no-one is left out. The enjoyment we all get from singing beautiful music in its proper context in some amazing churches far outweighs our costs; plus, we are a very friendly group!

We are always looking for potential new recruits to come and join us, so if you like what we do, and live in the North of England, we would be delighted to hear from you! 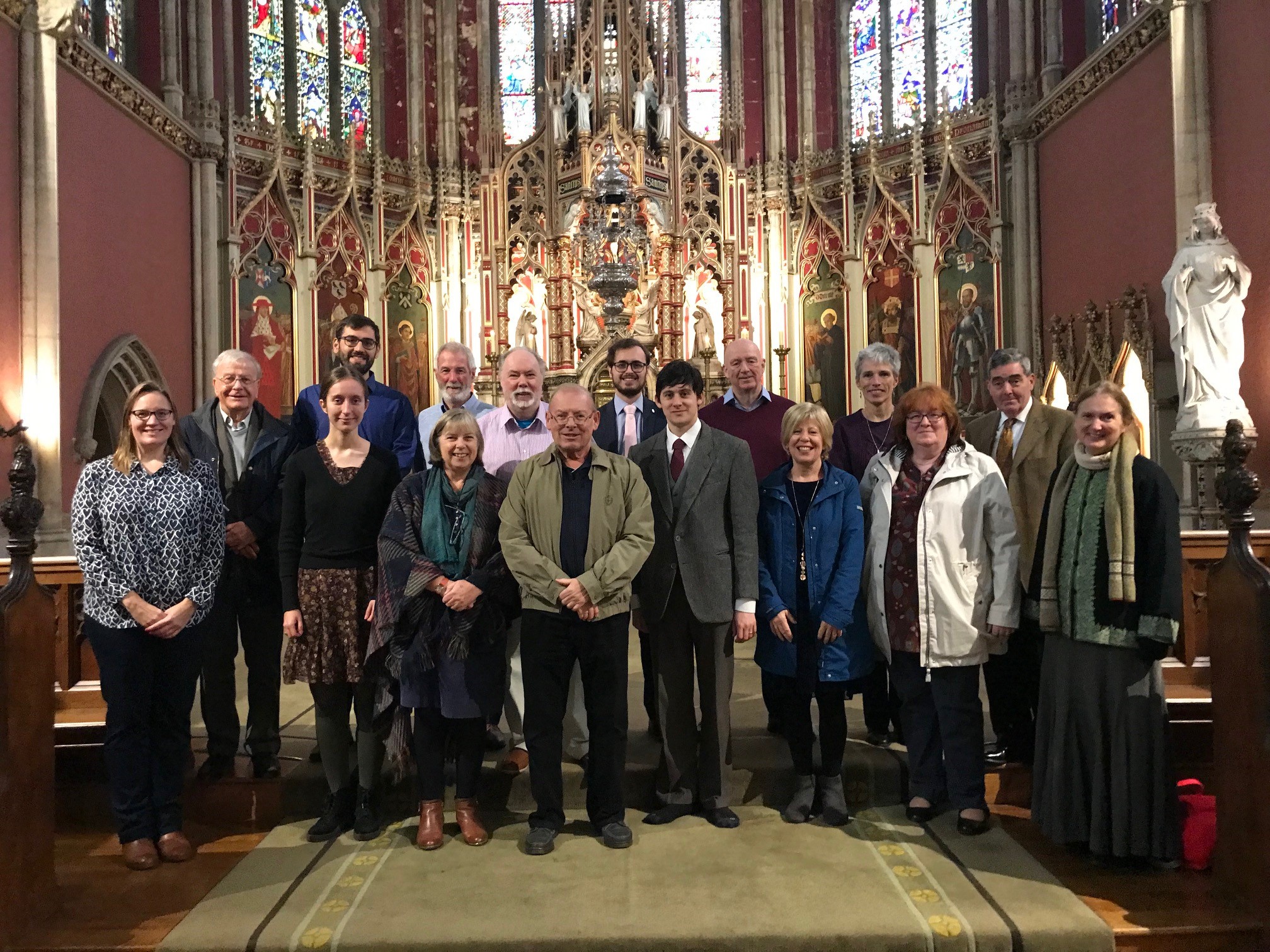 The Rudgate Singers in Ushaw Chapel after their Silver Jubilee Mass 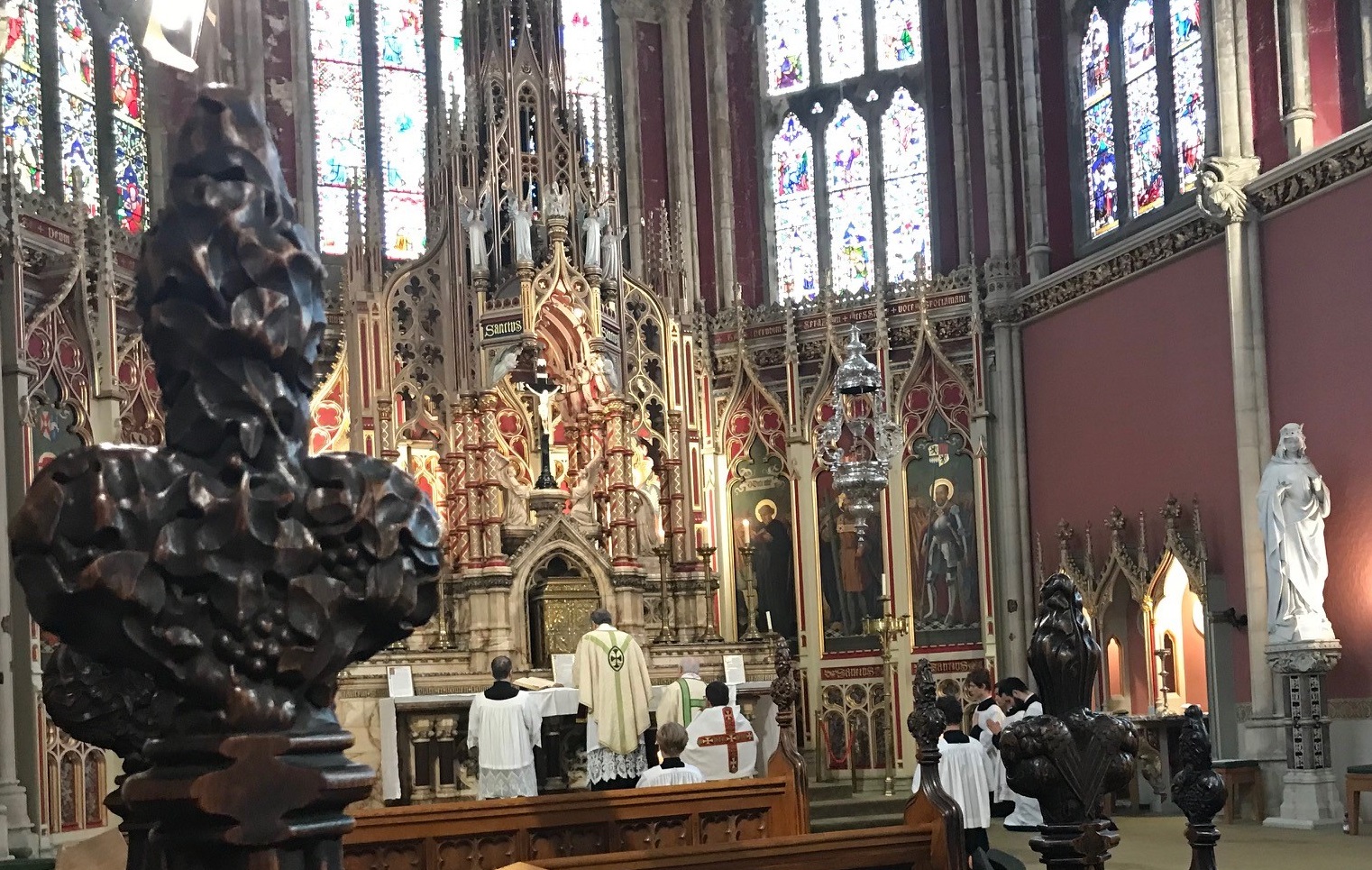 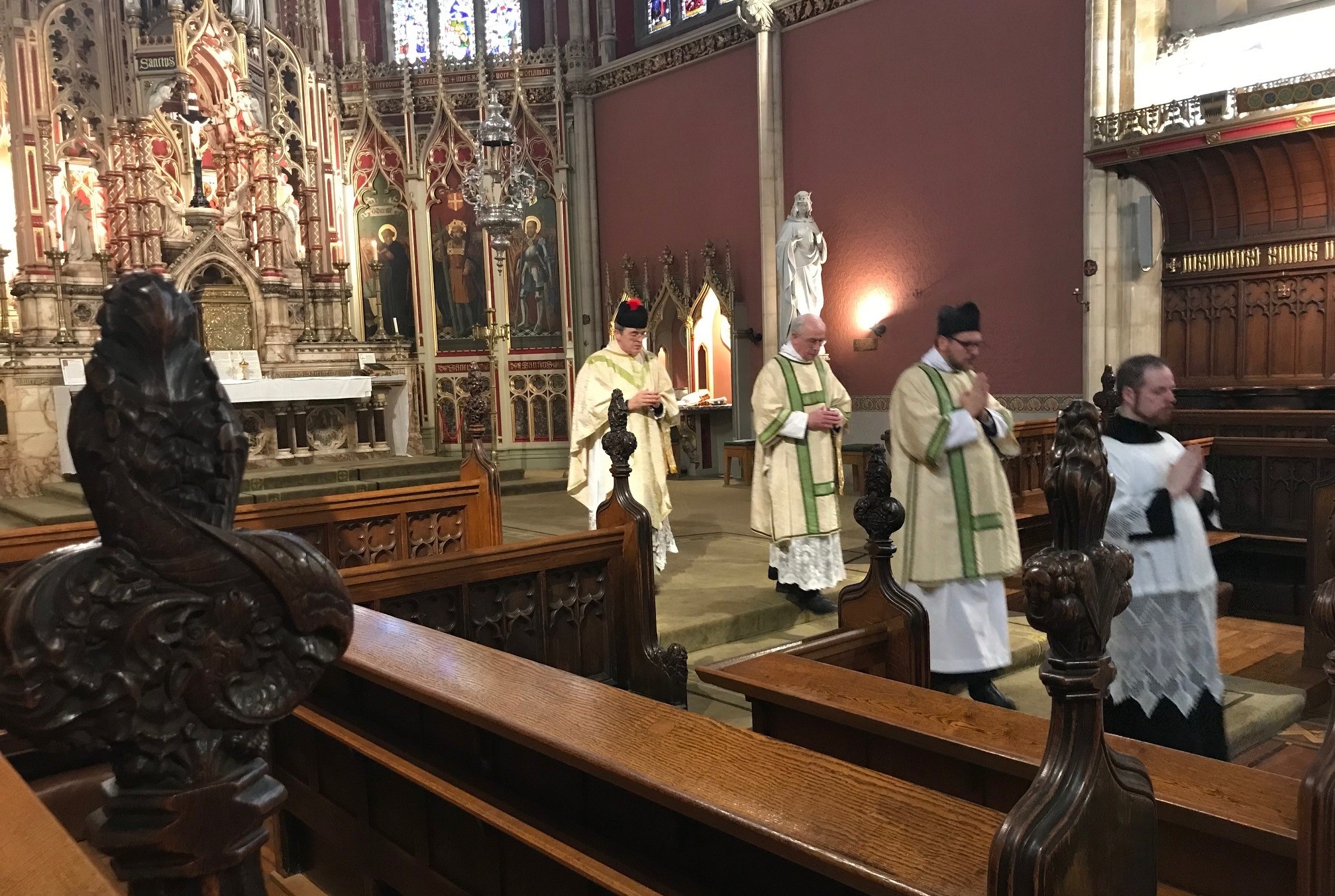 Mass at Ushaw was celebrated by Fr Michael Brown, the Deacon was Fr David Phillips and Sub-Deacon Endre Kormos