In the Diocese of Leeds, the Rite of Election (for the catechumans) is celebrated jointly with the Call to Continuing Conversion (for the candidates) at the Cathedral on the First Sunday of Lent.

Led by Bishop Marcus, this year’s celebration took place on Sunday 6 March, with priests and people from parishes across the Diocese taking part.

Throughout the remainder of Lent – which focuses on the need for ongoing conversion – the elect and candidates join with Catholics throughout the world in seeking to deepen their faith, grow in holiness, and strengthen their relationships with God and neighbour. 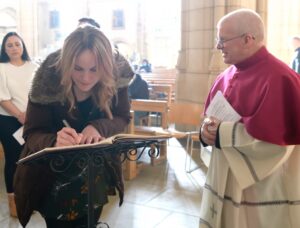 Who is a catechumen?

Those never baptized undergo a period of catechetical preparation and spiritual formation, after which they may become catechumens. During their time as catechumens, they deepen their understanding of the faith in order to ready themselves for the sacraments of Baptism, Confirmation and Eucharist. The Rite of Election is the ritual that marks their entry into the final phase of their preparation to receive the sacraments of initiation, usually at the Easter Vigil. Following the Rite of Election, they are called the elect, since they have been elected by the Church (in the person of the bishop) to become members.

Who is a candidate?

In addition, those already validly baptized in a different Christian tradition who experience a call to become Catholic are called candidates for reception into the full communion of the Catholic Church. By virtue of their baptism, they are already adopted children of God, brothers or sisters within our Catholic family. In order to become a Catholic they must complete their initiation through a profession of faith, followed by reception of the sacraments of Confirmation and Eucharist. During Lent, these candidates are invited to join the elect in their final period of preparation for these sacraments of initiation, which are normally celebrated at the Easter Vigil.

The photographs from this year’s Rite of Election can be viewed at https://www.patricksicephotography.co.uk/blog/

A Warm Welcome to Our Newest Priest

Cathedral Hosts a Civic Service of Prayer for Peace in Ukraine