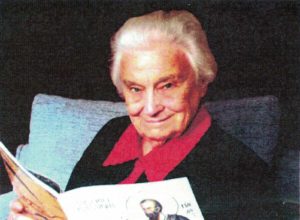 After a long illness Sr Catherine died on Saturday 23rd February in Birmingham where her funeral took place on Thursday 14th March. She was born in County Limerick in 1923 and made her Final Profession as a Sister of St Paul in 1947. For many years she taught in Catholic schools and colleges in various parts of the country and in 1967 she was awarded a PhD by the University of Birmingham. After retiring from teaching Sr Catherine moved to Leeds and became a well-known figure in the Diocese. From 1996 to 2004 she was Bishop Konstant’s Episcopal Vicar for Religious; she was an Auditor for the Diocesan Tribunal from 1997 until 2013 and she was also a member of the Historic Churches Committee, representing the religious communities of the Diocese.

Sr Catherine was blessed with a keen intellect and a lifelong desire for learning and knowledge. Her love and passion for Scripture was evident in all that she did. She had a particular devotion to St Paul the Apostle and brought many others to share in this. In the Leeds Diocese she worked tirelessly to promote the Gospel in parishes, retreat work, day conferences and her famous holiday pilgrimages, in the footsteps of St Paul. She was also instrumental in introducing the ‘Beginning Experience’ ministry to the UK, thereby bringing what was often much needed support to the separated, divorced and widowed, and their children, and facilitating the grief resolution process.

Sr Catherine will be remembered as a gifted and inspirational teacher. She was always wise, encouraging and non-judgmental of others and a willing listener. She was greatly loved and will be greatly missed by her family, her friends and her community.

May she Rest in Peace.

Bradford’s Friars back on the BBC!