Shedding Light on a Patron Saint of Bradford

Children and staff at Our Lady and St Brendan’s Catholic Primary School in Bradford were ‘enlightened’ by two feasts this week. On Monday, 3rd February, the whole school attended Mass celebrated by Parish Priest, Fr Paul Redmond, where the candles blessed the previous day for Candlemas ‘shed some light’ on a saint who is today perhaps not as well known in Bradford as he ought to be.

St Blaise lived in fourth century Armenia.  He was a physician by profession, but after living for some time as a hermit, was made a bishop because of his exceptional holiness and piety.  Refusing to renounce his Christian faith in the face of pagan Roman persecution, he was imprisoned, tortured by being scourged with sharp metal combs and martyred.  One of the stories told of him is that on his way to prison, he cured a young child who was choking – and since that time has become the Patron Saint of all ailments of the throat.

The Bradford connection with St Blaise is, unsurprisingly, through the city’s trade in woollen cloth and cashmere.  Because of the metal combs with which St Blaise was tortured, he became the Patron Saint of Wool-Combers and a statue depicting him – carrying carding combs – stands at a corner of the Bradford Wool Exchange.  The city celebrated his feast day with festivals and processions during the C19th and into the early C20th; there was formerly St Blaise Catholic Middle School; and of course the present day thriving Catholic Parish of St Blaise.

At Our Lady and St Brendan’s School, the celebration of Mass was followed by the traditional Blessing of Throats, which takes place under another symbol of St Blaise: two of the candles (blessed at Candlemas) tied together in the form of a cross. 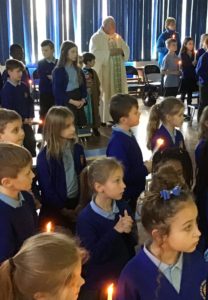 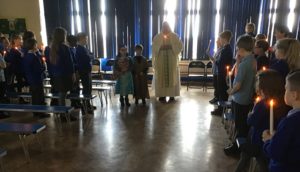 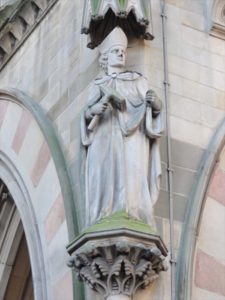 A History of The Word in 12 Objects Reaches Keighley