Selby Celebrates with Mass at the Abbey

Well over three hundred people of all ages from the local Catholic churches and from across the Diocese of Leeds, were welcomed by the Vicar and congregation of Selby Abbey on Saturday 25 May to a 6pm Vigil Mass celebrated by Fr Anthony Wilson, Parish Priest of the Catholic Parish of St Mary’s Carlton and Selby.  The Mass, which was part of Selby Abbey’s 950th Anniversary celebrations, is thought to be only the second since the dissolution of the Abbey at the time of the English Reformation.

The Anglican Vicar of Selby, Canon John Weetman, said, ‘We decided that an appropriate way to mark our 950th anniversary would be to invite the local Catholic congregations from St Mary’s Carlton and Selby to celebrate Mass in the Abbey, in recognition that it was a place of Catholic worship and ministry for the first 465 years of its life. We were delighted that Fr Tony Wilson accepted the invitation on behalf of his churches and we have very much looked forward to welcoming them for their Vigil Mass.’

When Selby Abbey celebrated its 900th anniversary in 1969, one of the most memorable aspects of the year was a visit – coincidentally also on 25 May – from members of the Benedictine community at Ampleforth Abbey who came to sing Vespers in Selby for the first time since the Benedictines were expelled in 1539 as a result of Henry VIII’s edict.

In 2011 the late Fr Michael McCarthy celebrated what was probably the first Mass at the Abbey since the Dissolution: a funeral Mass for Gerry Gibson, killed in a tragic accident in Kellingley Colliery. Owing to the numbers of mourners involved, his funeral service was held at the Abbey rather than his own church of St Joseph the Worker, Sherburn in Elmet.

Canon Weetman said, ‘That was, of course, a desperately sad occasion: this time the tone is one of celebration, although there is no doubt also a sense of regret for the way that our respective churches became divided all those centuries ago.

It is now a source of joy and thanksgiving that we are able to share in  partnership in the Gospel of our Lord Jesus Christ as part of Churches Together in Selby and we at Selby Abbey are very pleased to be able to host our Christian brothers and sisters for their Mass in this Easter season.’

Fr Tony said, ‘I consider it to be a great honour to celebrate Mass in Selby Abbey in the anniversary year of its foundation 950 years ago, I am very grateful to Canon John Weetman for his very gracious invitation and I know that the parishioners of St Mary’s, Carlton and Selby feel the same.’ 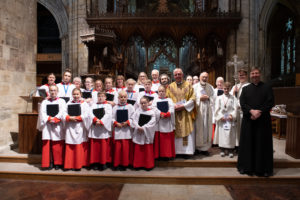 Follow this link to view or purchase any of the photographs taken at the Mass by Patrick Sice https://www.patricksicephotography.co.uk/blog/selby-abbey…and there will be an account of this historic event in the forthcoming Selby edition of the local weekly newspaper, the Selby Times https://www.gooletimes.info/?doing_wp_cron=1559042036.3442668914794921875000

Selby has Catholic and Church of England Parishes dedicated to Our Lady and also to St Germain, who is Selby’s Patron Saint.  More information may be found via:  http://stmarysselby.org.uk/   …and for more details about Selby Abbey and the events to celebrate the Abbey’s 950th Anniversary, visit their website:https://www.selbyabbey.org.uk/