If you lived in York many hundred years ago you might have gone to watch the Mystery Plays: a highlight of the year.  Perhaps you even took part in them. The actors were the ordinary people of the town, gathered in their trade bodies, the guilds.

The plays, staged on the back of wagons in the streets, told many stories from the Bible, including the death and the Resurrection of Jesus. They were very down to earth and were intended for a cast and an audience of ordinary people. The plays were dramas, but were also acts of devotion and reminders of the great things God has done for us.

We could think of Holy Week as our own version of the Mystery Plays.  It is a week of drama, intended for the ordinary parishioner.  Everyone is invited to join in. We listen to the readings, join in the prayers and share in the community actions

On Palm Sunday we follow Jesus as he rides into Jerusalem. With the crowds we welcome him with our hymn, ‘All glory laud and honour to thee, Redeemer King”. A few days later, on the evening of Holy Thursday, we take our place at table with Jesus and the Apostles. As he breaks bread we hear him say, ‘Do this in memory of me’.  Now darkness has fallen but we follow him out to the Garden of Gethsemane where we see him arrested and dragged off for trial.

Good Friday is a day of tears as we stand near the Cross and hear the last words of Jesus. We go with his friends as they lay him in his tomb and seal it with a large stone.

Easter Sunday is the climax of our drama. Suddenly the Lord is with us again.  He still bears the marks of his suffering, the scars of his love for us. But now he is risen.  He comes in triumph as the conqueror of sin and death. Our drama is complete. With the Lord we too have passed through the sorrows of betrayal and now we sing our Easter ‘Alleluia’ with renewed joy. 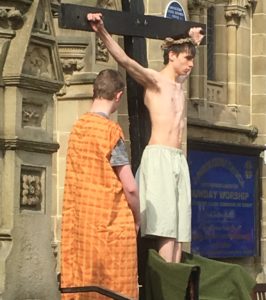 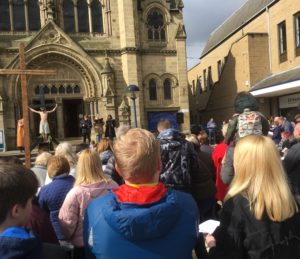 Each Good Friday in the Diocese of Leeds, students from St John Fisher Catholic Academy re-enact in the streets of Dewsbury the Passion and Death of Our Lord.  This public act of witness by the young people will be at 12 noon on Friday 19 April outside Longcauseway Church, WF13 1NH.

Thoughts on Lent: Our Spring Cleaning