Pilgrimage Praise: Catholic Schools at the Crag Chapel on BBC One

A visit by pupils from Harrogate and Knaresborough Catholic schools to the Chapel of Our Lady of the Crag will be featured on BBC One’s Songs of Praise.

Fifteen students from St John Fisher Catholic High School joined pupils from St Mary’s Catholic Primary on a pilgrimage to Knaresborough’s ancient wayside shrine. Along with their teachers, the young people were filmed leading a short act of worship and praying the Rosary.

The programme will air on Sunday 16 February at 1.15 pm in an episode about spiritual places of artistic and architectural significance around Britain. Dr Chris Maunder of the Our Lady of the Crag Chapel Trust said: ‘I gave a talk to the young visitors and was interviewed on camera about the Shrine’s unique architecture and told the story of how it was carved out of the crag in 1408 by John the Mason in thanksgiving for a miracle.’

‘The story goes that John had gone to quarry for stone, accompanied by his young son. A sudden rock-fall threatened to crush the boy, but God answered John’s hasty prayer for the Virgin Mary’s protection, and the falling rocks suddenly changed course and his son was unharmed.’

‘Medieval wayside shrines were places where people would stop to pray when travelling or on pilgrimage. The Crag Chapel still fulfils that purpose and is one of the sacred sites on the route of the annual St Wilfrid’s Way Pilgrimage between Leeds Cathedral and Ripon.’

Young people in Diocese of Leeds schools and parishes are encouraged to get actively involved in the life of the Church. St John Fisher School’s Lay Chaplain, Francis Atkin, said: ‘This local pilgrimage to Knaresborough was a great opportunity to share something that is important to us which often gets overlooked. Even though it is an ancient place it is still current today.’

Students Elizabeth, Cormac and Sophia said: ‘It was good to spend time out of the classroom to visit such a holy place and be interviewed about our beliefs: it felt like we were putting our Faith into Action and praying with our feet!’ 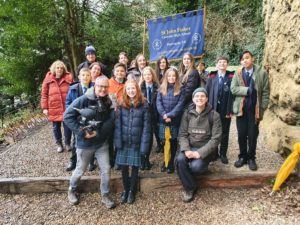 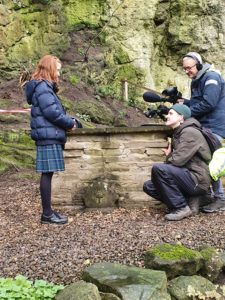