Our Fathers of Faith: our history comes to life

In 2008 Fr Nicholas Hird, Parish Priest of Cleckheaton and Heckmondwike, published the first two volumes of his monumental biographical dictionary of the priests of the Diocese of Leeds. This work covered the years from 1878, when the Diocese was founded, up to 1914. Anyone who has studied or simply dipped into the life stories presented in the first volumes of Our Fathers of Faith will know what a fascinating insight it provided into the history of the Diocese in its formative years.

The good news is that Fr Nicholas did not stop there and after a further ten years of research and writing he has now produced Volumes 3 & 4.The new publication takes the story on to 1939 and a period in time that comes within living memory. Indeed, some of the priests who feature here and were ordained towards the end of the period lived long enough to see the dawn of the 21st century and are remembered still by parishioners across the Diocese today.

Volumes 3 & 4 of Our Fathers of Faith together run to over 600 pages. Copies can be obtained directly from Fr Nicholas Hird by e-mailing him on nicholas.hird@dioceseofleeds.org.uk or telephoning 01274 872984. The cost is £25 for the two volumes. Some copies are also available for purchase at Hinsley Hall; further information about this is available by contacting 0113 261 8031 or robert.finnigan@dioceseofleeds.org.uk 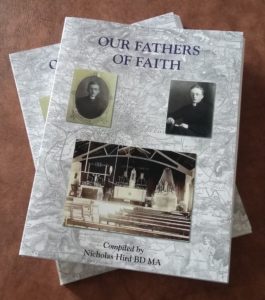 Icon of the Divine Mercy