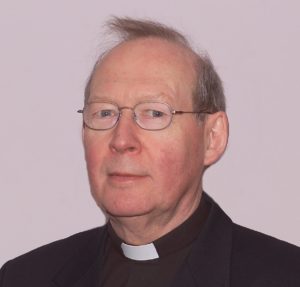 It is with great sadness that the Diocese of Leeds announces the death of Mgr Anthony Boylan who died peacefully in his sleep in the early hours of Wednesday 20 November.

Please commend him, his family and friends to your prayers.

Eternal rest grant unto him, O Lord and let perpetual light shine upon him. May he rest in peace. Amen

Wednesday, 11 December 11.00am: Mass for the repose of the soul of Mgr Boylan at St Boniface Catholic Church, Robin Lane, Bentham LA2 7AB followed by burial in Bentham Cemetery.

Anthony Bernard Boylan, or Tony as he was always known, was born in Bradford on 6 May 1939. Along with his brothers and sister he was educated in Bradford. Tony attended St Bede’s Grammar School, where their father was a member of staff for over twenty years until 1948. In 1955 he left Bradford and followed what by then had become a well-trodden path from St Bede’s to Ushaw College in County Durham, where he studied for the priesthood. He was ordained at St Joseph’s Church, Bradford on 24 May 1964. His younger brother, Bernard also became a priest and was ordained in 1967 and another brother died while he was a seminary student.

Fr Boylan’s first appointment was to St Peter’s, Doncaster, in the days when South Yorkshire was part of the Leeds diocese and before the creation of the Diocese of Hallam. In 1967 he went to Rome for further studies and three years later he emerged with a Licence and Doctorate in Canon Law. On his return to the Diocese he became Assistant Priest at Holy Family parish in West Leeds and in 1972 he moved across the city to the Holy Rosary, Chapeltown.

In October 1975 he was appointed the Secretary to the National Liturgical Commission, based in London. At the time the Commission was chaired by the then Bishop of Leeds, William Gordon Wheeler. London was to be Fr Boylan’s home for the next six years, while he worked at the Commission and established the Liturgy Secretariat at Eccleston Square. In 1979 he became the Bishops’ Conference National Adviser for Liturgical Formation. It was in this period that he acquired a reputation as an expert in the history of the Church’s liturgy and in contemporary liturgical practice. His expertise was such that he became Chairman of the Advisory Board of the International Commission on English in the Liturgy and for a number of years he was a frequent visitor to ICEL’s offices in Washington D.C.

In 1982 Fr Boylan was appointed a Chaplain of Honour by Pope St John Paul II and in the same year he returned to the Diocese and became Parish Priest of St Paulinus, Dewsbury. In 1986 Mgr Boylan moved to St Anthony’s at Beeston, in Leeds and in 1998 to the parish of SS John Fisher and Thomas More at Burley-in-Wharfedale. In 2006 he became the Parish Priest of St Boniface, Bentham, and of the parish of SS Mary and Michael at Settle He retired from active ministry in 2015 and chose to spend his retirement living in Bentham.

In the early summer of 2019 he was diagnosed with a terminal illness. As his strength declined he drew comfort from being able to join the Diocesan Pilgrimage to Lourdes in July, where, to his delight, his daily carers were students from his old school. He was present at the Cathedral for the Ordination of the Diocese’s newest priest later that month and this spoke volumes for his devotion to the diocesan priesthood and to his own vocation of more than half a century. 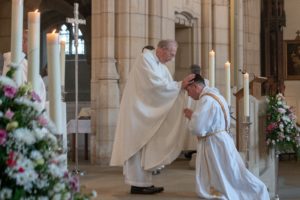 gr Tony Boylan will be long remembered for his encyclopaedic knowledge of the history and development of the liturgical life of the Church, which he was always generous in placing at the disposal of others who sought his advice. In his own diocese he served as Episcopal Vicar for Worship, Chairman of the Liturgy Commission, and founding Chairman of the Art, Architecture and Heritage Committee; he also established the Historic Churches Committee. He was ever an enthusiast for the liturgical reforms that emerged from the Second Vatican Council and he was a staunch defender of the post-Vatican II liturgy, not least in the letters pages of the Catholic press.

To his core, Mgr Boylan was a loyal son of the Church and of the Diocese of Leeds, its Bishops and its People. He served them all his adult life and especially during the fifty-five years of his priestly ministry. He was always positive about life and to the last he was a man of deep faith, rooted in the celebration of the Eucharist. His was, without doubt, a priesthood of both substance and distinction.

Why Catholic Schools Matter at this General Election – by Bishop Marcus