Arthur Louis Aaron is Leeds’ only World War II recipient of the Victoria Cross and the only member of the Royal Air Force to be awarded both the VC and the Distinguished Flying Medal. 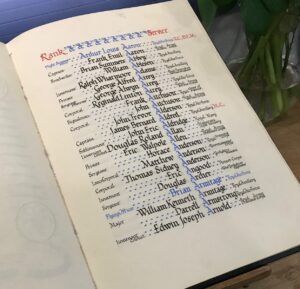 On 5 March 2022, on what would have been the Roundhay Grammar School alumnus’ 100th birthday, scores of local people of all ages, joined by senior RAF officers and members of the Yorkshire Society, gathered at Arthur’s old school for the unveiling of a plaque in his memory. 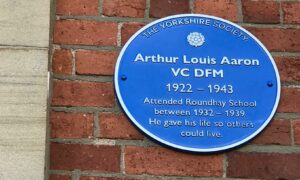 The event which included an exhibition, a buffet reception and fundraiser for St Gemma’s Hospice, was organised by brothers Stewart and Michael Manning, whose own late father had been Arthur’s classmate and friend. It is thanks to the Manning Brothers that there is now a statue of Arthur on Leeds’ Eastgate and a Family Support Unit funded in Arthur’s name at St Gemma’s. 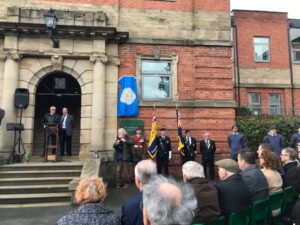 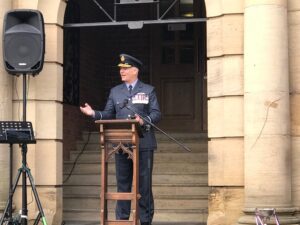 In 1943, in an act of bravery and although suffering terrible injuries, the 21-year-old Arthur landed his badly damaged aircraft at an airfield in Algeria, saving his surviving crew members. He later died from his wounds and ‘in some corner of a foreign field’ the Leeds lad was laid to rest, as was his friend and fellow Catholic crew member, Cornelius Brennan of the Royal Canadian Air Force, who had visited Arthur and his family in Leeds. 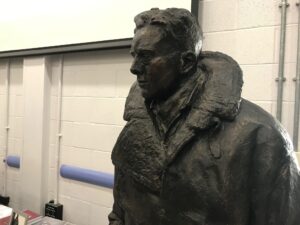 As a Catholic, in November 1943, a Requiem Mass was celebrated at Leeds Cathedral for the repose of Arthur’s soul.

It is through the knowledge and studies of another Roundhay School alumnus, historical researcher David Rattee who has assiduously compiled information about Arthur’s life using amongst other sources our own Leeds Diocesan Archives, that we know about his faith and family. Born in Woodhouse, Arthur was baptised at St Mary’s Church, Knaresborough. His father’s family was originally from Sherburn in Elmet and of a Protestant denomination and his mother was from Switzerland and a Catholic. 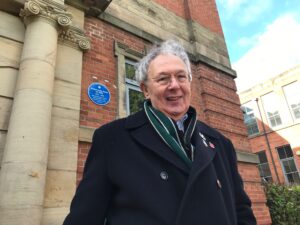 Plans are afoot in the Diocese of Leeds to mark either the centenary of Arthur’s birth this year, or the 80th anniversary of his death in 2023.

A special commemorative edition of The Roundhay Way School Magazine (copyright of Roundhay School) may be viewed here:

Diocese of Leeds: Lead the singing!