Catenians and their guests from throughout Province 3 North gathered at Hinsley Hall in Leeds before Christmas to celebrate the forty years of membership of City of Leeds Circle member, Peter Kennedy, a parishioner at St Joseph’s, Wetherby. 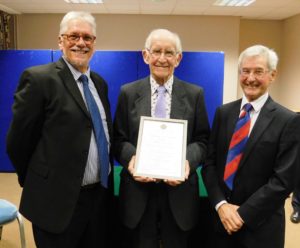 The presentation of his scroll and miniature by Province 3 Director Tony Deighton, came during the Circle meeting, which followed Mass in the chapel of Hinsley Hall, celebrated by Fr Anthony Rosso of St Joseph’s parish, Bradford. The Circle meeting and Mass were then followed by a celebratory meal in the dining room at Hinsley Hall.

Peter, a former President of City of Leeds 137 circle and Council member was born in in Leeds and educated at St Michael’s College. After his National Service he attended St Mary‘s College, Strawberry Hill, for teaching training. After qualification he joined the staff at St John Bosco School in Leeds and it was here that he met and later married his wife Anne. They have been blessed with four children and seven grandchildren.

Peter later moved on to become Headteacher of St Kevin’s High School for boys and St Nicholas’ Primary School, both in East Leeds. He became an Ofsted schools inspector and was a Governor of St John Fisher High School in Harrogate. A proficient footballer in his day he is also a qualified FA Coach and spent over ten years coaching the Leeds Catholic Junior football team.

If you would like to find out more about the Catenian Association, its social events and charitable activities, please contact:-