This year marks the centenary of the unveiling of both the Heckmondwike and also Cleckheaton’s Spenborough War Memorials. Features of our local landscape that with the dulling of their initial poignancy for local families are all too often taken for granted and which come into their own for the majority around the time of Remembrance Sunday each year. A timely reminder of this significant anniversary and of their intention to commemorate the fallen of the Spen Valley is the publication of Valiant Hearts by Father Nicholas Hird, the Parish Priest of both Cleckheaton and Heckmondwike.

In this illustrated 300 page book Fr Nicholas, with an impressive eye for detail, presents biographical sketches of more than twenty men who had connections with the Catholic churches that he serves. In addition to which, with the same attentive care, he records the life stories of the family members of some who suffered similar fates, although resident elsewhere or of a different faith background. The result of which is the formation of connections between our own local towns and villages and the likes of Ireland, Liverpool, and Stockport, together with theatres of war on the Continent, Mesopotamia, as well as the almost overlooked Battle of Coronel (1914) which was the first defeat of the Royal Navy in over a century, in which British casualties numbered 1,600 whilst not one German sailor was killed. Marking this book out as being different from many others of its like is the author’s inclusion of a civilian casualty, whose life was lost in a chemical explosion on Hollinbank Lane, Heckmondwike, in December 1914.

With the primary intention of this work being to remember and offer a lasting tribute, the author places his subject matter into their real-life circumstances and experiences. This includes their family, links to a particular faith community, their education and working lives, together with the wider social environment of which they were a part. Through the use of appropriate and detailed footnotes, the reader is taken into a time populated by both scenarios and people now virtually forgotten. These include places of employment and a localised socio-economic landscape recreated for the reader through the skilled use of the techniques employed by a genealogist. The names of Law, Cooke, Firth, Burnley, and others are subtly used to depict a time when the heads of local businesses invested their time, personal energies and resources into the communities of which their ventures of commerce were an integral part. It was from these families that many philanthropic gestures came, providing the local community with green spaces, places of worship, the governance of schools, and men and women who fulfilled the role of local magistrates and guardians. In his acknowledgement of the role that these families played in the area, Fr Nicholas, in line with the primary basis for his work, offers more than just a nod of recognition to the role that their faith played in the benevolence of both individuals and entire families.

Although clearly seeing his work as something on which others could build in the future, Fr Nicholas provides the most solid of foundations on which this may take place. With access to primary-source materials and his own proven track record for historical research he has more than fulfilled his intention of producing a lasting and accurate legacy of remembrance to the ‘members of the Catholic communities of Heckmondwike and Cleckheaton who were casualties of The Great War’. His skilled presentation offers a true depth of feeling for the subject matter, and a truly poignant reminder that the real cost of a war can never be simply be measured by a list of names etched into lasting memorials but rather the life-stories of the named individuals, their families, the local community of which they were a part and indeed the evolving life of the nation as a whole for which they sacrificed their lives.

This excellent publication is available to order from Fr Nicholas Hird at a price of £20 by emailing nicholas.hird@dioceseofleeds.org.uk  The original art work on the cover of the book was produced by parishioner John Brook, the backdrop to which is a map of the Spen Valley in the early 1900s, again reflecting the author’s eye for detail. 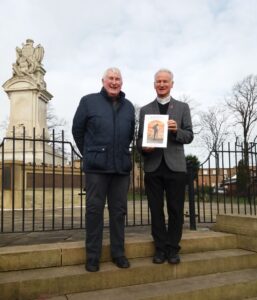