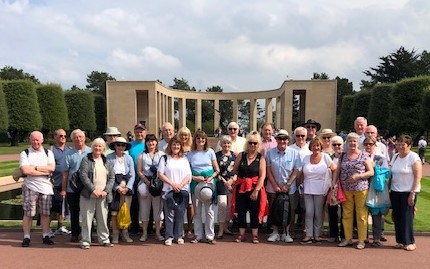 Local Catholics departed at first light on August Bank Holiday Monday from Holy Spirit Church at Heckmondwike to begin a five day pilgrimage to Normandy and some of the sites associated with the D-Day landings in 1944. Under the guidance of military historian and parishioner of St Paulinus, Dewsbury, Peter Bennett, the group of twenty-six also benefitted from the spiritual ministrations of Fr Nicholas Hird, Parish Priest of Heckmondwike and Cleckheaton. Enjoying beautiful (and at times very hot!) weather throughout their travels the group enjoyed the benefit of the celebration of an outdoor Mass each day. These were celebrated in some of the immaculately-maintained Commonwealth War Cemeteries en route. Prior to departure Fr Nicholas had armed each pilgrim with an amazing resource which was a very detailed biographical sketch of no fewer than twenty-five men from the Heavy Woollen District whose graves the party would visit and offer a token of remembrance. More than one pilgrim commented on how personal and poignant this booklet made the trip. At each grave site a pilgrim was invited to lay a small cross of remembrance on the grave of the fallen man, after prayers for the dead had been recited.

The list of the fallen compiled by Fr Nicholas crossed the historical divide of the two World Wars, and included men who, across just a single generation within their families, were united in offering the supreme sacrifice of their lives in the name of peace. Amongst these was Private James Phillips of Dewsbury who was just nineteen years of age when he lost his life on 10 August 1944 in Normandy. His mother’s first husband – also James Phillips – together with his brother Patrick Edward Phillips, and her brother, James Degnan, were all casualties of the Great War.

Staying at three hotels during the pilgrimage, the short visit was definitely a busy one, and took full advantage of the location of its overnight stops allowing pilgrims to see the Bayeux Tapestry and visit Lisieux Cathedral and the Carmelite Monastery where the relics of St Therese of Lisieux are housed.

Amongst the cemeteries visited was St Sever Cemetery Extension at Rouen. This contains over 8600 Commonwealth burials from both the First and Second World Wars. Its large size has to do with the fact that a number of Commonwealth camps and hospitals were located on the southern outskirts of Rouen, with the latter remaining there for practically the whole of the war. In light of this fact, many casualties were buried in the city cemetery, but with numbers increasing, in 1916 it was decided to extend the cemetery solely to accommodate military burials, hence including the word ‘Extension’ in the name. Amongst those buried there is Lance-Corporal Robert Farrell MM (pictured). 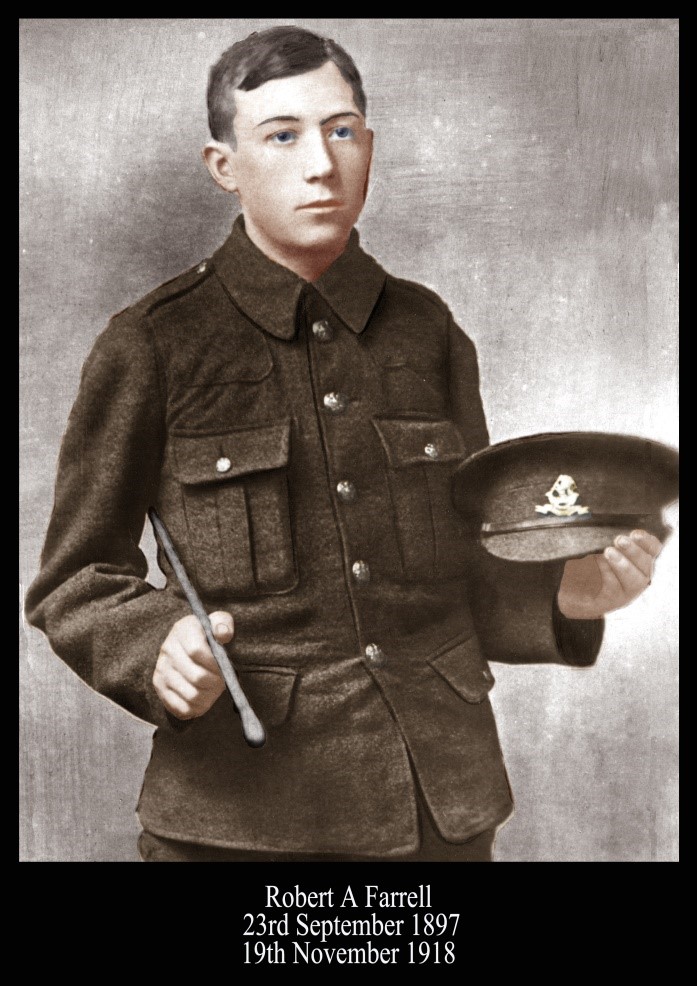 Robert hailed from Liverpool and, due to family circumstances, at the age of ten was placed – together with two of his brothers – in the care of St Anne’s Refuge and Industrial School for Roman Catholic Boys in the city. Having had a number of jobs from the time he was allowed to leave the School in late 1912, in January 1914 he arrived in Heckmondwike to begin working as a miner at the Strawberry Bank Colliery in Liversedge. Eighteen months later he had volunteered to serve with the Duke of Wellington’s (West Riding) Regiment and went to the Front in 1916. Clearly he had great affection for St Anne’s School, returning there on a visit just after the outbreak of the war, and also writing to the staff there once he had joined-up. As a Lance-Corporal attached to the 186th Trench Mortar Battery it is believed he was critically wounded after 4 November 1918 – just days prior to the signing of the Armistice. Moving along the casualty chain from the Front, which was some 130 miles away, he arrived at a hospital in Rouen where he died on 19 November: eight days after peace had been declared. He was twenty-one. Despite experiencing precarious formative years, Robert Farrell’s life was one of triumph over adversity. For bravery he was awarded the Military Medal.

Returning, for their homeward-bound ferry, the pilgrims stopped at Mont Huon Military Cemetery, at Le Treport near Dieppe. Here no less than thirteen of the men on Fr Nicholas’s list lie buried together with more than 2,100 others. Le Treport was an important hospital centre and it was here that the victims of the first Mustard Gas attacks in Flanders were brought for treatment. Sadly, many men were beyond help, but no doubt benefitted from the compassionate ministrations of the medical and nursing staff, not to mention the Chaplains tending to their spiritual needs. Three of the men remembered by pilgrims came from the congregation of St Paulinus’ Church, Dewsbury: Thomas Evans, Charles Carlos and Lionel Rayner. Poignantly, the latter two rest in adjoining graves. Whilst Thomas Evans’s elderly mother was intending to travel to see her only son in hospital, which was halted by a terse line of a telegram which read: ‘Cancel your visit to him’, another Dewsbury soldier’s wife did actually cross the Channel. David Rochford’s wife, Ann, together with her sister made the journey to Le Treport having received news of his serious condition. Sadly, on arriving at her accommodation Ann Rochford was informed of her husband’s death and his burial which had taken place just an hour before. The news was broken to her by Fr O’Sullivan, a Chaplain who subsequently took her to visit the grave which she described as ‘beautiful, being covered with lovely flowers’. Ninety-eight years on from that visit, Mont Huon was still being described by pilgrims from the Heavy Woollen District as being beautiful, peaceful and a place of inspiration. On the altar stone of sacrifice, with a backdrop of the English Channel, Fr Nicholas celebrated the final Mass of the pilgrimage (pictured). 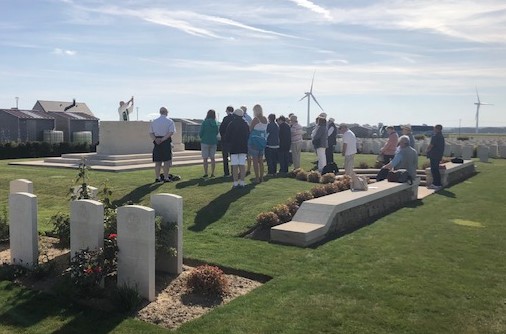 'Songs of Praise' from the Cathedral: BBC TV Sunday 3 July