On a visit to St Mary’s Parish in Halifax, Bishop Marcus was delighted to visit Michael Blackburn and his wife Christine – and to present Michael with the Diocesan Silver Medal. 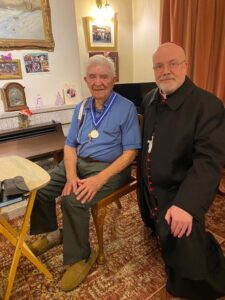 Michael loves the Holy Rosary and finds it a very prayerful and peaceful way to pray, as well as giving the opportunity of meditating on the life of Jesus and Mary. He is a member of the Halifax Circle of Catenians and back in 2002, inspired by a Rosary Group founded on a cruise ship at sea, Michael gathered a group together from Catenian Circles elsewhere in the Diocese and across the country, and founded the Catenian Rosary Group. It was launched in October, the month dedicated to the Holy Rosary: fortuitously and providentially at the start of the ‘Year of the Holy Rosary’ designated by the Holy Father.

From then on, and with the support of Bishops, Archbishops and Cardinals, enthusiasm for the Catenians Rosary Group spread out from St Mary’s Parish in Halifax, across the Diocese, the country and the world! Catenians from Australia, Zimbabwe and later South Africa joined what might be termed, a ‘ring of Rosaries’ – and by 2010, interest and demand was such in Australia and South Africa that a leaflet on ‘How to Pray the Rosary’ was produced. It can be obtained via the Rosary Web Site www.catenianrosary.com

The aboriginal people in Australia’s Northern Territory became especially good ‘customers’ with a deep devotion to the Rosary, and many lapsed Catholics of all backgrounds have returned to their faith through praying the Rosary. Since then the work has spread to many countries throughout Africa, to Islands in the Pacific Ocean, and to prisoners in the Philippines.

From 2015, on the advice of Sr Janet Fearns and Fr Roger Reader (CBCEW Prisons Adviser) the Rosary Group began to send Rosaries to UK prisons. Demand has been huge! For security reasons most prisons are only able to accept plastic Rosaries in one colour, which cannot cause damage or division amongst prisoners. Some prisons have started Prayer Groups where they have learned to pray the Rosary and now have a good attendance at Holy Mass, and this aspect of the Rosary Group’s work is now undertaken by National Catholic Chaplain for Prisons for England and Wales, Fr Paul Douthwaite.

In 2017 in discussion with Michael, other brothers expanded the provision of the Rosary Group to include an apostolate of ‘Rosaries to Schools’ and with every new development, Michael and his brother Catenians believe that ‘At all times Our Lady is in charge; we just move the paper work around!’

By September 2021 an estimated 565,943 Rosaries had been sent to Missions throughout the world and 37,870 white plastic Rosaries had been supplied to prisoners in England and Wales. As of today the total stands at nearly 700,000 – that’s almost 100 Rosaries a day over 20 years!

Understandably, having recently celebrated his 90th birthday, Michael Blackburn has now passed the baton to Mike Bunting, who has written the full story of how the Catenians Rosary Group came into being, which can be found at: http://catenianrosary.com/page-1  Please continue to send any ‘spare’ Rosaries to: Mike Bunting, Rivendell, Denbigh Road, MOLD, Flintshire CH7 1BL. Telephone number 01352 753736

The Diocesan Silver Medal is a fitting tribute to Michael Blackburn’s years of service to the Halifax Parish of St Mary, to the Catenians and to promoting prayer and evangelisation of the Catholic Faith through the Holy Rosary!

New Permanent Deacon in the Making!