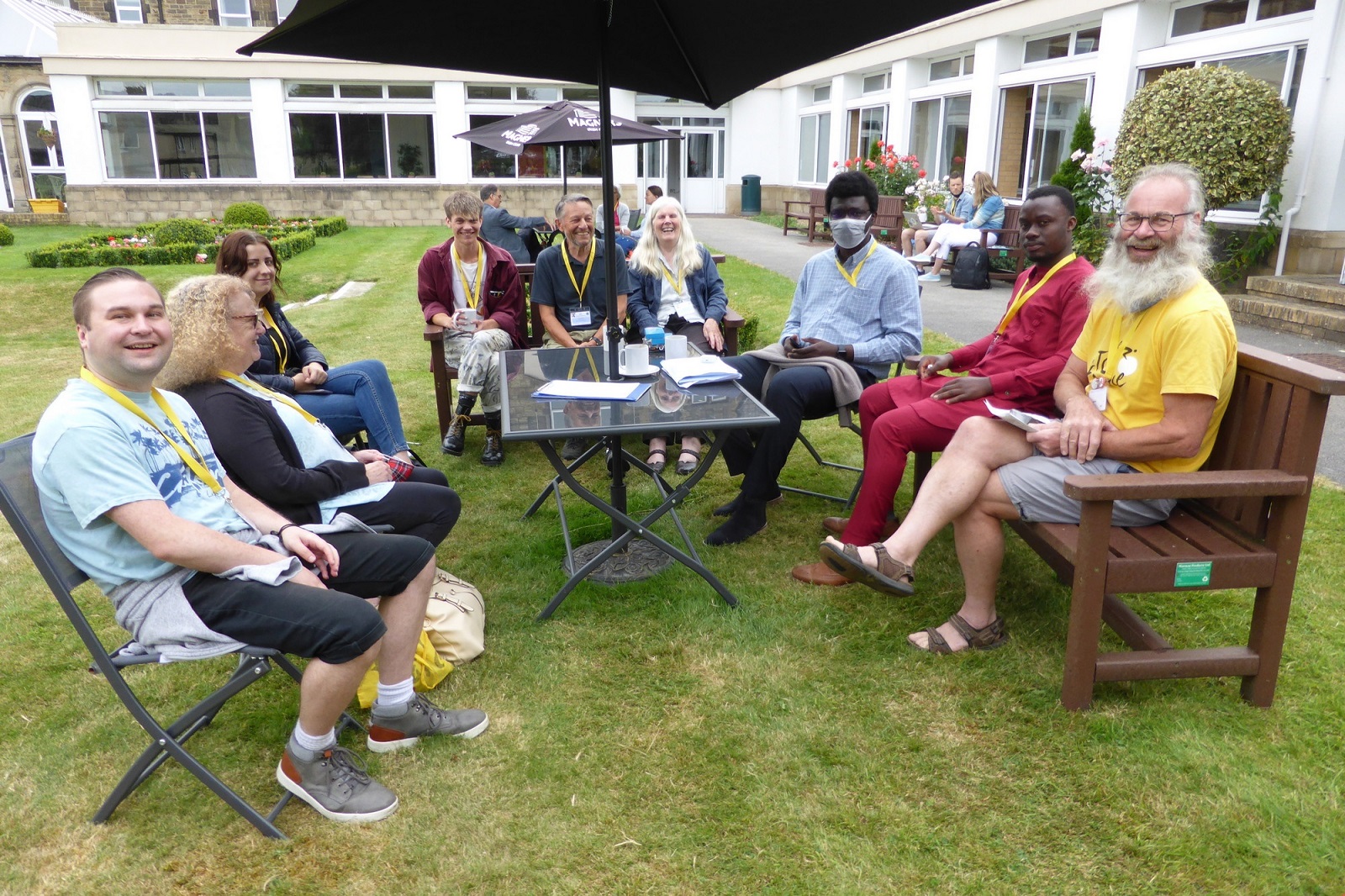 On the weekend of 23 to 25 July, the National Justice and Peace Network met for their annual conference at the Hayes Conference Centre in Swanwick. The topic for 2021 was climate change, calling the network together to discuss ‘Action for Life on Earth’. The Diocese of Leeds was fortunate enough to have 10 representatives at this, the 43rd Annual Conference, many of whom have been attending for a number of years.

As the weekend marked 100 days until COP26, discussions were fuelled with the urgency and passion the current climate crisis demands of us. For three days almost 200 people gathered to discuss the work that needs to be done, not just as part of the Justice and Peace Network, but in a united effort with the wider community of our brothers and sisters in faith.

In this spirit of cooperation, contributions came from representatives of many other charities and organisations. Christine Allen, Director of CAFOD, chaired the conference and stands from organisations such as the Student Christian Movement, Christian CND and Pax Christi, filled the main hall for the duration of the weekend.

Set in the context of Laudato Si’ and Fratelli Tutti, the conference was centred on Pope Francis’ inspiring Papal Encyclicals which call on us to care for our common home. As Fratelli Tutti reads, ‘Let us dream, then, as a single human family, as fellow travellers sharing the same flesh, as children of the same earth which is our common home, each of us bringing the richness of his or her beliefs and convictions, each of us with his or her own voice, brothers and sisters all.’

Alongside those attendees from Leeds who have become well-known faces at the National Justice and Peace Conference, were four young people, Sara, David, Chukwuemeka and Matthew, who were sponsored to attend as part of the Leeds Justice and Peace group’s new youth project: SPARK Social Justice.

Over the course of the weekend, key-note speakers took the stand to address the climate crisis and the responses they wished to see from their own fields of expertise. The speakers – Fr Eamonn Mulcahy, Mark Rotherham and Lorna Gold – were joined by Bishop John Arnold, Andy Aitkins and Christine Allen for a panel discussion.

The range of both professional and personal experiences the speakers and panellists brought to the table highlighted once again the value of including as wide a range of people and perspectives as possible in the response to the climate crisis. As Fr Eamonn said, ‘there’s no way that we’re going to solve the problems of our planet unless we first throw the spotlight on ourselves and try and recreate and regenerate an authentic idea of humanity, and though a united front is needed, it must be an encompassing and inclusive unity.’

This spectrum of perspectives on how we should respond to the climate crisis was also evident in the range of workshops on offer. One of these was run by Leeds Diocese’s own Tim Devereaux, who led a well-attended discussion on ‘Conflict and Climate’. Other workshops covered issues such as ‘pastoral care for climate distress’, ‘nonviolent direct action and environmental protest’, ‘church divestment from fossil fuels’ and ‘a just transition to a green economy’.

Delegates found the 2021 National Justice and Peace Conference to be an inspiring weekend. At times, the struggle to protect our planet from this man-made climate crisis can seem overwhelming, but as Pope Francis has said in Laudato Si’, ‘May our struggles and our concern for this planet never take away the joy of our hope.’. As COP26 grows ever closer, the time to act is now. Let this hope be at the heart of our actions!

Click here for videos of speeches from the conference

St Mary and St Michael Parish at Settle has a very active environmental groups, and their members also send this account:

“The time for action is now” is the message the lead bishop on the environment for England and Wales gave at the annual conference last weekend of the National Justice and Peace Network. Bishop John Arnold of Salford says, “this meeting, a few months before COP26 in Glasgow, allows the voice of the church to come together, unite and look at ways we can take the call for action back to our parishes and communities to create a different legacy for the next generation.”

He feels, “this conference comes at a unique and vital moment for we are seeing weekly more and more evidence of the irreversible damage that climate change is having on our common home.” This refers to, “clear evidence around the world” of “severe and long-term droughts, floods, rising sea-levels and extreme record-breaking temperatures that our actions and our way of life are inflicting on our world.”  He spoke about Churches and faiths making clear they want action and “we can mend our common home”. He has been in zooms with COP26 president Alok Sharma MP, “trying to speak loudly to politicians”.  In the conference Mass he thanked NJPN “for who you are, what you stand for and what you want, and for keeping Pope Francis as an inspiration in our lives and actions.”

Conference chair Christine Allen, director of the Catholic Development Agency CAFOD, reminded that there are now 100 days to COP26. CAFOD is working with the Global Catholic Climate Movement (GCCM) and faith leaders to lobby for global warming to be kept below 1.5 degrees. She reported that CAFOD, “amplifies voices around the world in climate vulnerable situations”.

In a video message Fr P. Joshtrom Isaac Kureethadam SDB, Coordinator of the ‘Ecology and Creation’ sector of the Vatican that promotes Integral Human Development, told the conference “The planet is crying out and the poor are crying out; we need to open our ears and hear these painful cries;” feeling there is hope and that “this could be a watershed, a moment of change.”

Keynote speaker Lorna Gold, Chair of the Board of the GCCM and author of ‘Climate Generation: Awakening to Our Children’s Future’, highlighted the “vibrant network of networks sustaining and nurturing ecological conversion right across the world” and turning Pope Francis’s world letter Laudato Si’ “into a lived reality.” Laudato Si’, on Care for Our Common Home, speaks powerfully about the interconnectedness of the ecological, social and economic crises the world is facing. Lorna Gold applauded the role young people have played in stimulating climate action. “Young people have done more in two years than the rest of us have done over three decades” she said. Lorna felt the pandemic is teaching us that we are all connected to each other and to nature and what it means to act together to face a common threat. She felt Pope Francis’ vision of ecological conversion refers to “community conversion” and asked: “What if that process of community ecological conversion was to extend to the entire world of faith communities that still encompass 80% of the world’s population?”

Andy Atkins, head of Arocha UK, underlined how far Churches have come with programmes such as Live Simply, Eco Church, Eco Congregation, Climate Sunday and Fossil Fuel Divestment with Operation Noah. In fact, more than 5000 churches across the Christian denominations are registered with green schemes which “was unimaginable 30 years ago” but “we need to speed up.” He deplored the UK government’s loss of credibility to deal with the crises facing us. “At a time when the government says it is leading the world it has cut its aid budget and has opened the door to further fossil fuel development,” he lamented; “we should be saying ‘No More Fossil Fuel Exploitation’ in this country!”

Fr Eamonn Mulcahy’s presentation on, ‘Let us dream together: Pope Francis’ Gospel Vision for an Integral Humanity’, considered criticisms of excessive anthropocentrism, consumerism and the technocratic paradigm – all themes taken from Laudato Si’.  “We must be agents for healing and restoration” he said, “respecting every living creature and organism.”

Speaker Mark Rotherham, of the Northern Dioceses Environmental Group, felt it essential we transform our current economic system so that it promotes both social equality and environmental protection. “A good life-sustaining economy is about slowing down and recognising planetary boundaries” he said. He described the arms industry as “a huge shadow over our nation” and felt that we need to withdraw legitimacy from this draw on global resources and energy. We have to decouple economics from material consumption.

Settle St Mary & St Michael parishioners Paul Kelly and Maggie McSherry joined an enthusiastic action planning session at the end which included dioceses forming Laudato Si’ Action Platform groups, organising Climate Sunday Masses, promoting the Live Simply programme in parishes and schools, and urging divestment from fossil fuels. Inspiration was taken from a presentation by Emma Gardner, new Head of Environment in Salford Diocese, who manages the flagship Laudato Si’ Centre and stimulates environmental action in Salford’s parishes and schools.  (Paul and Maggie are pictured 3rd and 4th from the right in the group from the Diocese of Leeds). They both returned from the conference energised and brimming with suggestions for action at personal, local and diocesan levels. They will be helping plan activities and services during the Season of Creation in September as part of the preparations for the COP in Glasgow. Paul has been inspired to try and be in Glasgow during part of the COP to take part in witness for the climate. He said “I was in Paris for the huge COP in 2015 when all the world leaders pledged to tackle climate change. It is so important the politicians know they are not operating in a vacuum and that people really care what they decide. Being directly outside the conference can be surprisingly powerful.”

Around 15 workshops were available on such topics as: ‘Sustainable Development Goals,’ ‘Conflict and Environment,’ and a ‘Nature Explorer Walk’ run by botanist Judith Allinson, who also lives near Settle. Justice and Peace Scotland gave a briefing around ‘Attendance at COP26 – real or virtual’.

Since 2005, NJPN has regularly taken an environmental theme for the national conference and its Environment Working Group, formed that year, helped plan the 2021 conference. Paul is a member of the Working Group. 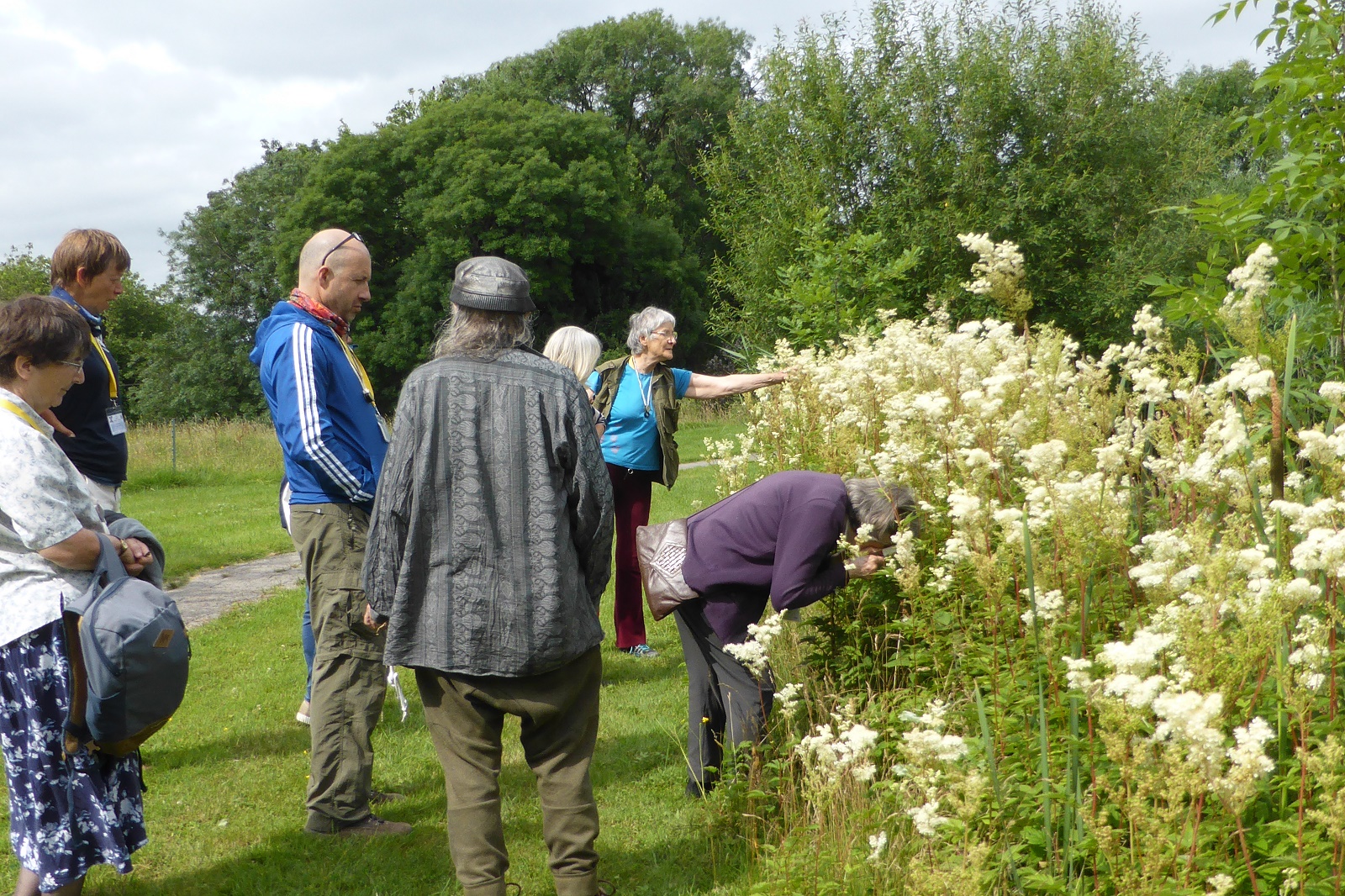 Nature walk led by Judith, a botanist and member of Settle’s Methodist community